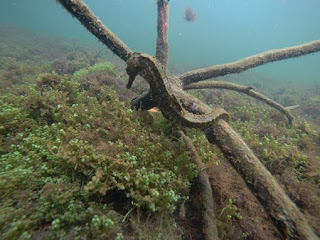 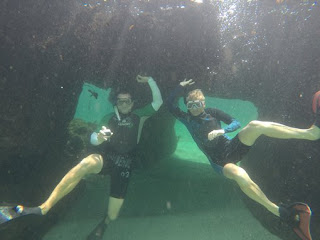 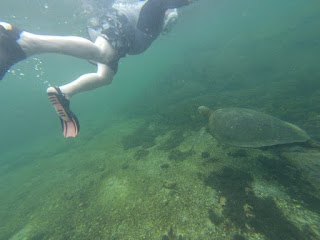 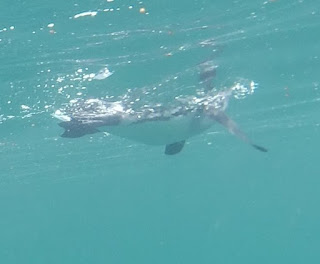 The island of Isabela is shaped pretty much
like a sea horse. Yesterday we took a snorkelling trip to the SW corner of the island, together with the Aurora B team of Ed, Gemma, Henry and Eva, and a very knowledgeable naturalist guide called Rodolfo. The boat Anita was crewed by Captain Klever with his sidekick Captain Banana (according to their T shirts).

Our destination was Los Tuneles, part of the coast where lava has left incredible rock formations and arches, and it was snorkelling paradise. Much shallower than the seas around Kicker Rock off San Cristobal island, it was less daunting to slip over the side of the boat even though we knew that these too were shark infested waters. But only reef sharks, Rodolfo reassured us, and apparently they aren't remotely interested in us.

Our bravery was rewarded instantly by a little Galapagos penguin whizzing around just next to us underwater, chasing his lunch. We encountered enormous sea turtles who didn't seem at all bothered by our presence. Rodolfo found a sea horse, about 20cm long, wrapped round a stick on the sea floor.

Photo credits: Rob and Rodolfo
Posted by Jo Withers at 19:39