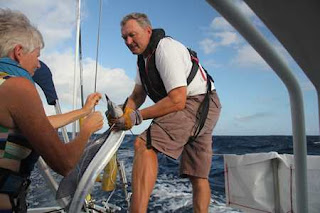 Since Richard left the boat our fishing efforts have varied between
poor and pathetic. Richard's best rod and line was stolen from the
back of the boat in the Galapagos, which was a huge shame. He had left
the boat brilliantly equipped, but with no one with the right skills.
We tried to get one of the other reels to work on a rod, but either the
rod or the users weren't up to the job.

So we went back to a handline dangling off the back of the boat.
First the lure was taken by we-know-not-what, then the line
mysteriously snapped near the boat and then we caught the towed
generator. That made a big mess and we resolved not to fish while
generating. Yesterday, with sufficient power in the battery, we put out
the handline again fully expecting to bring it again at dusk with no
fish hurt. We rigged a bungee cord to indicate if anything pulled on
it. Imagine our surprise when we caught what we think was a blue
marlin. We think this because it looked like a marlin and was blue -
but it was substantially smaller than the giants of fishermans' tales.
It was hauled aboard reasonably easily and we decided to release it
because we thought it was a baby and because it looked so beautiful. Jo
extracted the hook which had gone through the top of its bill and we
threw it back - hopefully allowing it to grow to a giant over the next
years.

If anybody can identify it from the photo, please let us know.

We had tinned tuna for supper.
Posted by Rob Withers at 10:34