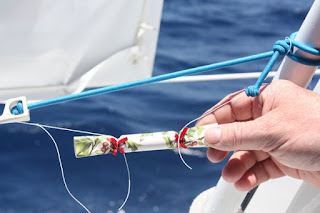 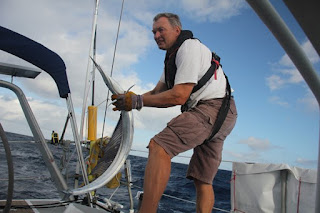 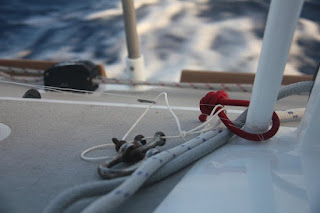 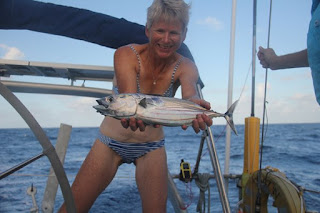 Having been deprived of all technical aids in fishing, first by the theft in Peurta Ayora of Richard's best line and reel (so sorry Richard) and then by the age and non-functionality of the backup reel, we were forced to revert to primitive methods. This was, of course, a hand line.
Then we needed some warning of our future success in the form of a fishometer.
Mark 1 ,depicted in the first picture here, worked very well probably. Unfortunately the engine was on so we did not hear the cracker go off, but had evidence that it had worked in the spent cracker. And the splendid sail fish also shown here.
This was so beautiful that it got returned to fight another day.
I shall have to leave evidence of the mark ll version to be provided by future marine archeologists. But the fish that took it and a good part of the line must have been huge.
Progress was now rapid and advanced immediately to the Mark iv. This incorporated (see below) the Clever Little Improved Part (CLIP) and the Better Understood New Gear Elastic Extension (BUNGEE). Both of these parts worked faultlessly and resulted in the catching of the Skipjack Tuna shown. This was deemed not quite as pretty and was, instead,very tasty indeed.
To provide a bit of detail to the illustration, the cotton is, in fact, sail repair cotton. This is strong enough to hold the line drag but not a small skipjack tuna. When it breaks the old shackles make a Big Bang, everyone wakes up and hauls in the catch.
Worked like clockwork and all parts, except perhaps the cotton, are ready for reuse.
Engineering drawings available from Rob.
From Steve.
Posted by Jo Withers at 23:53