We arrived in Marina Santa Cruz at about 5:00am this morning, having motored almost all of the previous day.  In all, the trip from Madeira was a pleasant contrast from the passage from Cascais.  The sun shone, the waves were gentle and we could relax on board.  Whilst it's really important to know that the boat, equipment and people can cope in a blow, it's really nice not to have to do it very often!

So, it's a slow day today - doing washing and domestic chores to get the boat ready for leaving for 3 weeks.  We're returning to the UK - returning in mid-November.

Having said goodbye to David and Ben in Madeira, we set off from Quinta
Do Lorde yesterday morning for the 260Nm south to Tenerife. The
position of the marina - at the base of a 100m vertical cliff at the
very narrow eastern end of the island - means that alarming katabatic
winds form in the marina as the wind climbs over the ridge before
plunging vertically downwards. Although not violent, the noise of
these gust running through the rigging was enough to give the skipper a
fretful night wondering how to extricate ourselves from our berth
safely. When the moment came, RYA training worked and it absolutely
fine and we motored out to a flat sea and lovely northerly wind.

Yesterday, we bowled along either goose-winged our broad reaching
making good time in great conditions. The wind died in the evening and
the engine went on at 10pm. We're still puttering along now with
barely a breath of wind - hope to be in Tenerife tonight - probably 4am
or similar again1
Posted by Rob Withers at 09:48 No comments:

We arrived in Madeira at at about 4:00am yesterday morning.  David is claiming  victory in the arrival time sweepstake because his guess was almost spot on.  However, James is also claiming victory because we didn't actually arrive in Funchal, we stopped just up the coast at Quinta do Lorde.  Having said the latest time, he reasoned, he was therefore closest.  We stopped at Quinta Do Lorde because, as we picked up phone signal nearing the islands, an email arrived saying that Funchal marina had, as of that day, stopped taking non-local boats.  Really not helpful to get that at midnight after a 500Nm sail.  Anyway, it was fortunate that we could go to Quinta Do Lorde easily - it was nearer and has plenty of room. 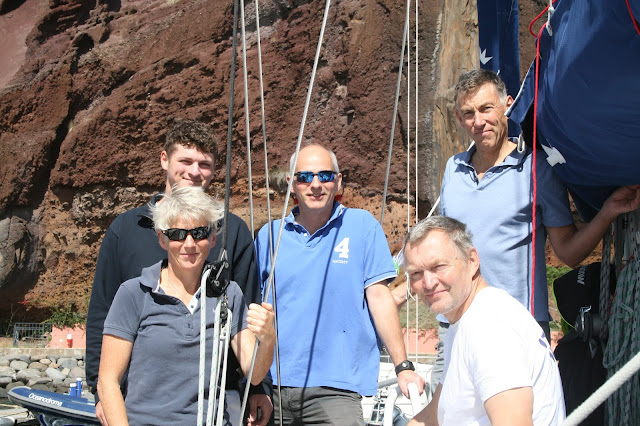 The last few hours of the passage we pretty memorable. As night started to fall, the wind picked from Force 4/5 to Force 7 gusting 8. We went from full sail to 2nd reef main and no genoa in 15mins and started a moonlit sleigh-ride past the island of Porto Santo and towards Madeira. David, Ben and James added the accompaniment of Pink Floyd to complete the surreal picture.  As we approached Madeira, the seas were rising and about 3Nm off the eastern end of the islands we met some particularly gnarly waves.  I (Rob) was on the helm and could hear a roar behind before a wave rolled the boat to an alarming angle and then landing on the stern.  It filled the cockpit (and my boots) with water.  It was bad enough that Jo swore.   A few more minutes like this and another rolling drenching before the seas started to flatten nearer the point.  On subsequent closer inspection of the chart, it turns out that if you have a gale forcing the sea over a seabed that rises from 4km depth to less than 80 m in 1/2 Nm or so, then you get some big seas! 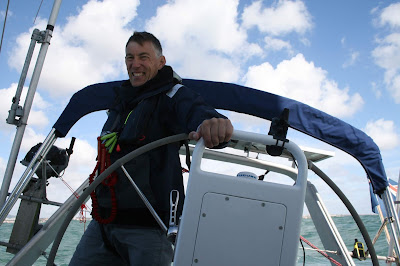 Behind the island, the sea flattened and we motored the last few miles into the marina.  Dark and quiet, we bumbled around trying to find a spot before drifting gently sideways into a large empty berth.  ......And breathe.......

We were a bit sluggish yesterday morning, but by the afternoon we had perked up to explore the island - which is more spectacular than I could have imagined.  The geology of the place is stunning, and luckily we had James the geologist to explain it all to us. We walked out to the eastern tip and looked out over the patch of sea that got me so wet. 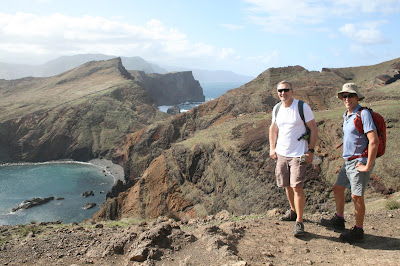 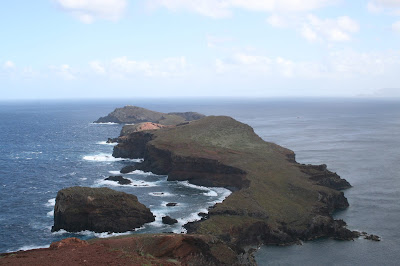 It was rough out there!

David and Ben have just left to fly home and we have another day here before continuing south to Tenerife. 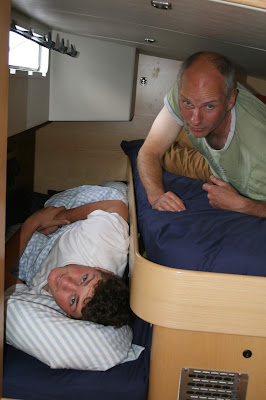 and here are a few action photos

After the trying first couple of days, the weather has settled down and
is atoning for its histrionics last week. We've had a good 24 hour run
on a nice broad reach making between 6-8knots. It's overcast and the
under the occasional shower the wind gets up a bit. We think that
we're also getting some assistance from the Canaries current, which
flows south down the coast of Africa.

At supper last night, the sweepstake on arrival times varied between
midnight and 5:00am tommorrow morning. With 125Nm to run, I still
fancy my entry of 3:06am
Posted by Rob Withers at 09:52 No comments:

Well, if the past week has told us anything, it is that weather
forecasts are not necessarily accurate!

After the days of plotting and predicting the track of ex-hurricane
Leslie the various grib models still couldn't quite agree where (s)he
would make landfall - and they were all wrong anyway! Landfall was
earlier than most models predicted and a bit further north - saving
us from the worst of it. It was fun watching 'Life of Brian' while
also keeping any eye of the weather. The wind (inside the marina)
peaked at F9 then abruptly dropped to about 15kn before going back
up to gale force from the other direction. The pressure,
meanwhile, dropped to 1004 then rose back up to 1008 during the
film!

Since our departure the forecasts haven't been great either. As we
left there was the predictable swell but whereas the forecast had the
wind moving to the west F5 - What we got was steady F7 gusting 9 with
us trying to get as close to the wind was we could. We have a really
great crew and Tintin coped faultlessly, but we were all somewhat jaded
by last night.

Happily, the wind has moderated and backed and we're even getting the
occasional glimpse of sunshine so morale is on the way up again and
sea-sickness is less - but it's still oilies, lifejackets and clicked on
it the cockpit. 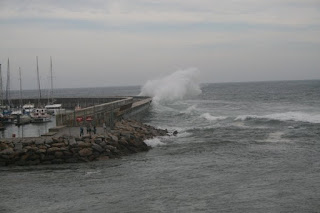 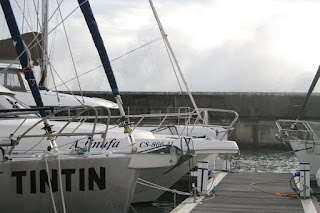 Last night was a bit blowy, as the remains of Hurricane Leslie whistled by. The epicentre was, luckily for us, a little further north. Yesterday afternoon was calm and sunny, and here in Cascais marina you could see people methodically preparing their moored boats for a big blow. Checking and doubling up mooring lines, lashing furled sails, and tidying up anything that might fly away.
We witnessed the weather changing in textbook style. As the afternoon progressed, it became hazy and cloudy but still warm. The wind gradually rose in strength as the barometer dropped.
A walk along the shore road demonstrated to us what a great job the marina sea wall does. Waves were crashing against it and being forced to do a 180 turn. in the photos, Tintin is the third boat along the pontoon from the sea wall end, but by evening we were getting regular showers from the spume of the waves.
Down below deck we were very warm and dry, enjoying a film night while gale force winds blew.
This morning it is bright and clear and the wind has moderated. We plan to set off for Madeira later today.
Posted by Jo Withers at 11:18 No comments: 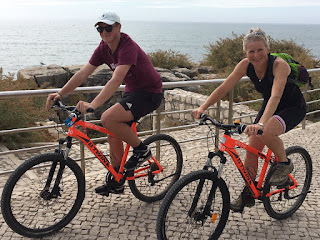 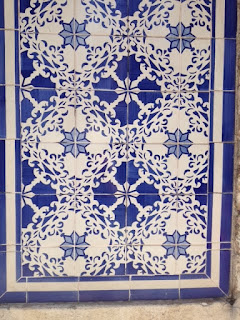 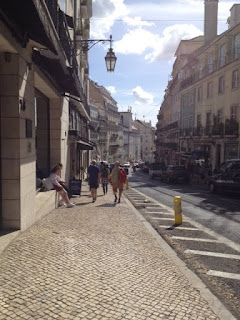 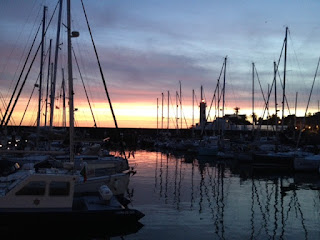 It's lovely to be back on board Tintin for this second leg of the trip: Lisbon to the Canaries, about 750 miles.
We have our Atlantic crew assembled. Joining us are James Heath, Jo's brother David Gurney and his son Ben.
We plan to sail to Madeira and then on to Tenerife.
The weather forecast has been changing daily, and the cut off low pressure system that we have been tracking is still causing us to pause. We are following 4 different forecasts and between them they seem sure that this low pressure will move steadily east or north east, but their predictions for its track vary significantly. One has it passing through Cascais Marina (that's where we are now) tomorrow night with peak wind speeds of around 60 knots (75mph) at midnight. Another forecast reckons it will be 700 miles further south.
We intend to wait and see, with mooring lines nice and tight.
So we have been treated to a few days here in Cascais. Time to explore Lisbon and surrounds and develop a taste for custard tarts.
Posted by Jo Withers at 17:57 No comments:

Looking forward to returning to Lisbon

We're starting to think about our return to Portugal on Wednesday, and the sail down to the Canaries.  For the last 2-3 months there has been a consistent F3-5 NNE down the Portuguese and African coast that would have provided great sailing.  Now, however, autumn has arrived and the weather pattern is more disrupted.  The grib file for next week shows a nasty looking low pressure area splitting away from Hurricane Leslie and making its way across the Atlantic beneath the rather squashed Azores high.  The screenshot below shows the current prediction for next weekend - when we would be approaching Madiera.  Winds of 60kn plus - probably with waves from different directions as the low passes. We really do not want to be in the way of that storm - I'm sure the boat and crew would be fine, but it would be no fun at all. 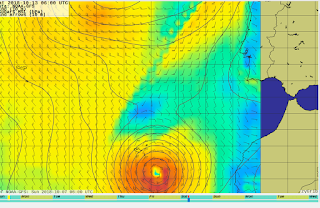 The grib prediction has changed a lot since yesterday - so it's almost certain that the path and speed of the low will not be as currently predicted.  we'll just need to keep a close on its progress and make sure we stay well away from it.

Cascais is a nice place to spend a few days anyway!

Get updates by Email