I've just returned from a weekend in Belgium participating in the Liege-Bastogne-Liege sportive.  Most sportives in the UK top out at just about 100 mile mark, but this was over 170 miles, lots of climbing and most of the hills in the last 1/3 or the race - so a very good test of preparation for the Tour De Force.

The day started clear and cold.  A strong northerly wind blew and it was about 3degC when we rolled out at 7:00am.  The route meandered through the grim industrial outskirts of Liege before we eventually reached 'Km 0' - where the official 'race' begins after 12 miles or so.  From there the route climbed out of the town and into the lovely Ardennes countryside.  There were some good groups for the first 60 miles and I made good speed powered by the Jo's chocolate flapjack and the tailwind.

At Bastogne, the route turned sharply into the wind, and for the next 45 miles it was vital to get into a good group to counter-act the effects of the wind.  A couple of times I was dropped by a few yards and had to strain to get back into the group.  Had I not done so, I would have lots chunks of time.  The supply of chocolate flapjack failed at this point, and there was rather an unpleasant period when the major climbs started and I felt very under-nourished.  I was crawling up some of the hills, whilst others seemed to be flying.  However, I generally was able to use my superior size to maintain speed on the downhill sections. 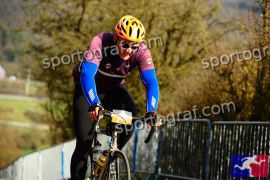 The picture shows me at the top of 'La Redoubte' - perhaps the most famous climb on the route.  The bottom section was lined with camper-vans waiting for the main event the following day, but there were few supporters nearer the top.  I was going very slowly at this point!

At the last couple of feed stops I forced down a number of unpleasant energy bars, and that allowed me to finish in better form that I had feared with 50 miles to go.  In the end, I took 11 hours 25 mins to do 172 miles - about 4 hours 45 mins behind the pros,  but then they didn't have to go so far......
Posted by Rob Withers at 17:34

We've just returned from Devon, where the weather went overnight from the cold easterlies caused by the blocking high over northern Europe to warm southerlies, driven by a deep low west of Ireland.  The result is not only  a lovely increase in temperature but a change in the pacing on my standard ride.  Yesterday I was 5 minutes quicker on the 1st hour, and 7 minutes slower on the 2nd hour, into the wind.  For those who care, or haven't got anything better to do, you can see my training on Strava.

I'm now starting to fund-raise in earnest, so if you would like to support my attempt to ride the route of the Tour De France, please donate here

In a few days, we'll be off to do the Liege-Baston-Liege sportive.  160 miles of rolling Belgian countryside.  That will be the first proper test of the winter's training.