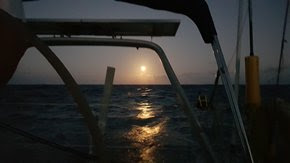 From Steve,
It was 5 weeks ago tomorrow that I got a message from Rob asking if I
would be around at lunchtime the next day.
I speculated a bit to myself what it could be:-one of their children
needing bailing out of jail: watermaker gone completely kaput:book
flights home.
I did not expect "What are you doing in March?" fairly rapidly rephrased
to "What are you doing for March".."all of it".
Having got some leeway before replying, I thought quite carefully about
the pros and cons. It's a long way; flights aren't cheap; can I
actually get flights; can I get insurance?; what was I meant to be
doing? and ,of course, do I want to be travelling all that way on my own
and being away from home for so long:
The overwhelming thought in the end was that this was almost
certainly the only chance I was likely to get to come this far away
in the world. So will blessing of family and friends (Thank you Lynda
and everybody) I accepted.
Then you actually find that just dropping stuff is not that easy, I had
a present to finish making, things to cancel and so on.
But it all got done, just about, in time and I arrived roughly on time.
I think probably the most unlikely thing to be able to arrange was the
flights. The way out landed on what was no more than an airstrip and I
think the return is from an even smaller site. And virtually with one
click it was all arranged!
However, I was certainly right. I would almost certainly not have come
this way without this trip. I most certainly would not have spent 3
weeks out of sight of land or boats crossing the Pacific.
My image of the Galapagos is no longer David Attenborough talking
earnestly to an Iguana and discussing the significance of the number
of ridges on its back (or whatever) but rather of a huge and
varied wildlife community which exists almost entirely separately from
its numerous watchers, neither attracted to, or scared by, them. I only
had a chance to see a tiny fraction of the wildlife there, I suspect
only the actual workers get the full picture.
The sailing is much more what I was expecting. I crossed the Atlantic
with Rob and an impressive cast of 3 others (Hello all) back in 2011 so
knew largely what to expect. Tintin is roomier than Halcyon so you don't
live quite so much in each others pockets.
The hours are a bit longer, because there are only 3 of us, but the
winds (so far) change less, so alterations during the nights hours are
rare.
The Pacific feels a bit different. Rather than on the Atlantic, we left
a long way from any continent and finish a very long way from one. The
Atlantic had start and finishes considerably closer to mainland. There
is no other traffic here. No planes, no ships, no satellites, nothing.
Except for flying fish, the wildlife seems less, certainly fewer
dolphins.
Sunsets are good in both.
As to the Marquesas, where we are headed, I suspect these will be
nearly as far from the familiar as it is possible to get. We shall see.
As to being away, I have missed home, despite regular updates, I still
miss it all and will be glad to get the long return journey over. I
will be leaving Rob and Jo in the safe hands of their children and
then, hopefully, a recovered Richard and Nikki.

Enough refections, I'd better get this sent off.


On the subject of reflections, how is it that I can take the attached
picture of moonrise with my phone, which weighs about 200 grams and is
not top of the range, whereas my camera (which was pretty well up there
when it was new and weighs nearly as much as Jo's sewing kit, thanks
Sue) can't even get close?