Tintin has reached the northern end of the Panama canal. Here we will be saying goodbye to the Atlantic , and traversing the canal south to the Pacific ocean.

The fleet has gathered at Shelter Bay Marina, opposite the city of Colon, to prepare.
First, each vessel has to be measured by a canal official to see if it crosses  the 50 foot threshold (if so  you need to pay another $400 to the authorities). Tintin was measured by a very friendly man called Jose, who wielded his tape measure with aplomb and declared us 47.5 feet. Phew. He then stayed on board for a while chatting as all the required waiver paperwork was completed, and showed us photos of the Pope’s recent visit to Panama City, where he had volunteered (representing the canal). He said all of Panama was so happy to have the Pope visit, and all problems were forgotten. Hundreds of thousands of people gathered from all around the world for the event.

I digress. We refuelled for the first time since Las Palmas and discovered we had only used 160 litres of diesel since leaving the Canaries. Wind power!

Next on the to do list was to see if Tintin could be haul ed out for a bottom scrub, Before entering the waters of the Galapagos we have to have a hull entirely free from any flora or fauna, and Tintin has been gradually acquiring a green beard of algae and a thriving community of barnacles over the last few months – more  in the warmer sea temperatures than we would usually see in the cooler home waters around the UK.

After Rob had a word with Edwin at the boatyard, we were lucky enough to be directed straight to the boatlift to be hauled out – all within a few hours of arrival.
So now we are living on board Tintin in a garden of grass and palm trees, climbing up a ladder at the stern to get on board. The hull has been power washed and barnacles scraped off, and tomorrow a new coat of antifouling will be applied. 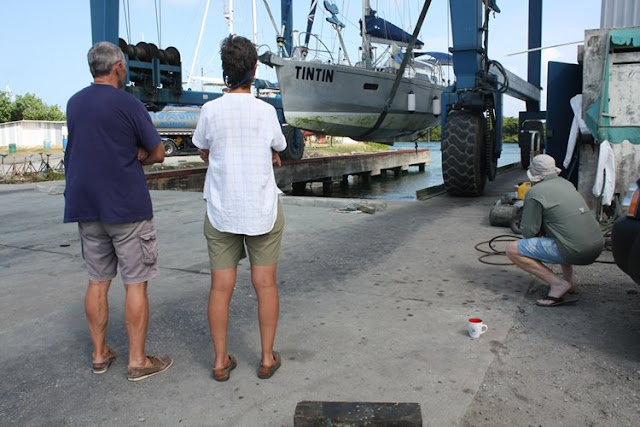 We have been briefed about how we traverse the canal in “nests” of 3 yachts tied up together in rafts, and we will start our journey through the canal on Tuesday. Exciting times!