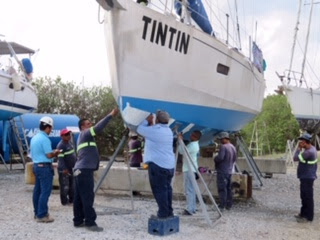 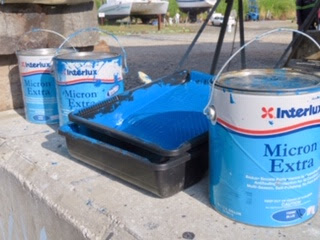 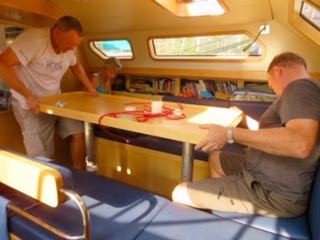 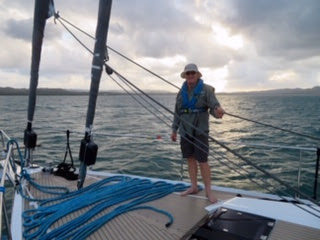 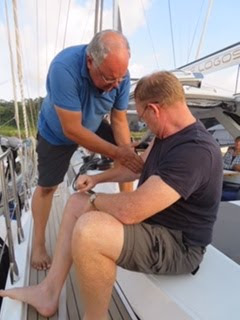 Nicki here, about to head to Panama City airport to fly with Richard back to NZ to get urgent surgery on his distal biceps tendon....after advice over the phone from our lovely Cheviot GP (who was on holiday when we called her!) we will go straight to Christchurch hospital and trust that the operation to reattach the tendon to his radius bone can be done without delay.

Richard's injury happened when, following the exact instructions of the Panama Canal's advisor, Richard threw a very large coil of the heavy blue line from the bow towards a nearby boat, and in the dark it snagged on a large electric whinch at the foot of the inner forestay . Doing much the same job at the stern I knew I simply didn't have sufficient strength to throw a heavy coil of line that far - unfortunately Richard's muscles are stronger than his tendons it seems. Peter from Chanto examined him the following morning and identified a likely surgical injury.

With the anti fouling paint debacle and Richard injury, Tintin's crew have had a difficult week.... we also had a problem with raising the saloon table - it lifts up to make a large bed - so we are hoping that Tintin has had her full quota of 3 accidents and things will now run smoothly as Rob and Jo head off to the Galápagos Islands without us....

Devastated for Richard and Nicki. Have been following your adventures with so much enjoyment. Now wishing Rob and Jo safe travels, and no more disasters. I shall continue to follow your blog of cpurse, you always make it so personable and enthusiastic.. Every good wish!Christine Martin (Nicki's Mum)