Hello, Steve here adding to the blog for the first time.

I arrived 2 days ago from home on three flights which all went smoothly until the end.

After the 1 1/2 hour flight of the last leg from Guayaquil, the approach seemed a bit lumpy and the pilot then soared away to go round for another go, This happened twice more after which he turned around and went back to the start. Information was scarce, but we gathered in the end that we were refuelling and going back to try again.  All communications were meant to be off during refuelling so apologies for the lack of information to anyone following my progress.

Second attempt was fine and I was met by Rob who told me that everywhere had been under water at the time of the first attempts and they had not actually seen the plane at all, just heard the attempts.

Rob and Jo and in fine form and, of course, very welcoming. I find I have a reputation to live up to as a bringer of fair winds that avoid the need for tacking. I have perhaps 4,000 sea miles in my history and only one (at most) tack in the lot of it.

The Galapagos are both similar and different to what I was expecting. The town of San Cristobel, where I landed, would remind you of a small, low key, slightly touristy, Mediterranean coastal town.

The other areas, though, are exactly what one would expect. There is wildlife everywhere.  Virtually no mammals, but vast quantities and varieties of birds, fish and others.

The group though is much larger than I had expected. The island where we are now, Isabella, is the largest and is 100 Km from North to South. I am informed that only 0.01% of the total area is accessible to tourists.

Yesterday we had a trip further along the island for a walk, beach swim and snorkelling. A hard life indeed. The snorkelling was particularly special. At a place called Kicker Rock fish were evident in their droves, like a huge aquarium. This was combined with sightings of sharks (not aggressive or hungry), turtles and sea lions.

I should say that sea lions are everywhere. They will come and plonk themselves on any comfortable surface they can get on. You can't leave a dinghy tied to your boat; it will end up swamped with them.

The distinguishing feature of the wildlife seems to me to be that it just ignores you.  It isn't scared of you, but neither does it come up to you for food. It might land on something you bring, as with the sea lions, but then you have to be persistently noisy male yourself known to them to shift them off.

We travelled overnight, mostly motoring, to our current location in Isla Isabella and the morning is being occupied by catching up on sleep and similar activities. 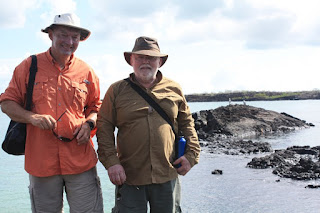 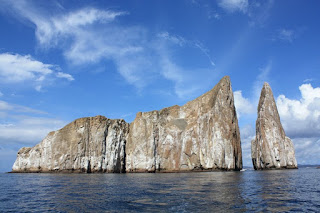