Nicki catching up with blog entries…
We departed Port Resolution a day behind the rest of the WARC fleet, and had a brisk ~50 nautical miles sail to Erromango.  The Yasur volcano was venting lots of smoke and ash as se sailed past, fortunately sufficiently far away that very little of it landed on Tintin's deck or sails.  On the way Richard caught a skipjack tuna.
That evening on arrival at Dillons Bay, we caught up with most of the WARC fleet again, just in time for see them all leave for Port Vila overnight; most of them complaining that they had had very little sleep in the rolly anchorage the previous night. We deployed Rob's 'popper stopper device' (a horizontal board just under the water surface, weighted down to minimise the side-to-side rolling of the boat hanging from the spinnaker pole off the side of the boat; this worked pretty well for us.
The following morning Richard and I went up the river in the dinghy to the village and were befriended by Chris who was playing the guitar under a tree with his friends.  We asked to be introduced to the village chief, but since he was away in Port Vila Chris took us to meet the chief's daughter Joanna instead.  She was very happy to receive some gifts for the village including our freshly caught and filleted fish, and some 'trading items' from Jo's cupboard including first-aid supplies, toiletries, baseball caps, glasses etc.
The island of Erromango is famous for its sandalwood and kauri trees; since our sailing boat 'Rhumbline' is built of New Zealand kauri we were interested to see some Vanuatu kauri trees if possible.  Most of the large stands of trees are far inland, so Chris took us for a walk along the river to show us a kauri tree which had been planted by his great-grandmother some 20 years earlier - clearly kauri trees grow a lot faster here than in NZ. 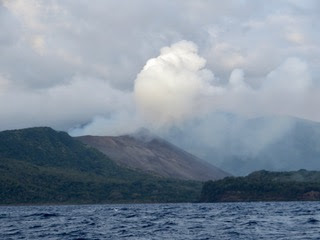 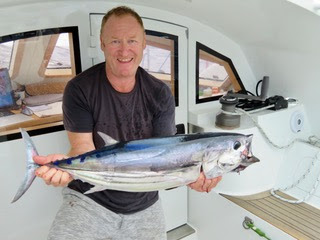 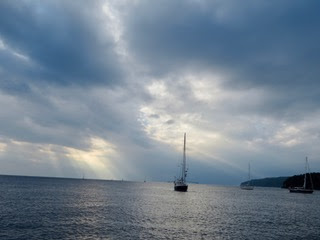 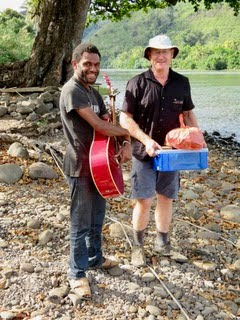 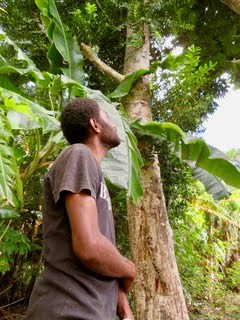