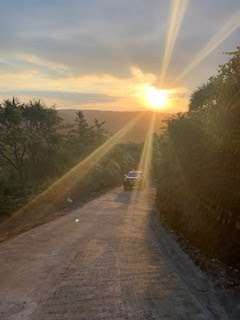 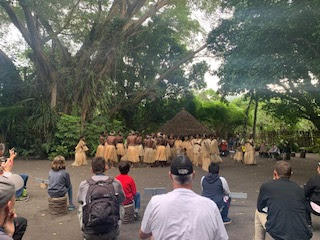 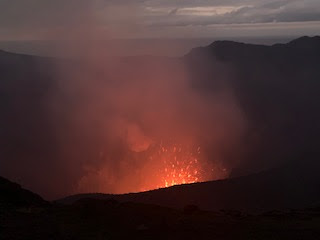 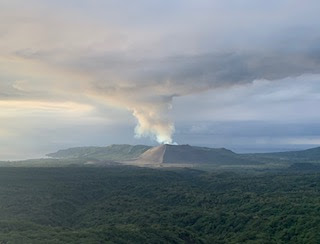 We are back in Vancouver now after 9 days aboard Tintin. It was an action-packed trip and we had an amazing time relaxing in Musket Cove, having a "boisterous" sail to Vanuatu, meeting the locals and seeing a different way of life in Port Resolution and enjoying the night life in Port Vila. Probably the most magical experience though was the trip we took up the volcano on Tanna, Mt. Yasur.

An hour's drive by 4x4 over rough dirt tracks from Port Resolution, Mt. Yasur is a desolate landscape in the middle of a tropical paradise and the contrast makes both all the more beautiful.

After arriving at the base of the mountain we were treated to a ceremony by a local chief and took part in a traditional "volcano dance" to appease the spirits that inhabit it. Next was a further bumpy ride, a short trek and we reached the rim. It was relatively quiet when we first arrived but as the sun went down there were displays of magma being thrown up every ten minutes or so and we were torn between trying to get some good pictures to share and not wanting to miss a thing.

It's hard to do justice to such an awesome experience but we hope the photos give you some idea!

Many thanks to Rob and Jo for allowing us aboard the mighty Tintin, to Nicki for her fine skippering (as the only female skipper on the Arc to boot), and to Richard the fisherman, whose exploits have been well documented, for keeping us well fed.
Posted by Jo Withers at 03:06