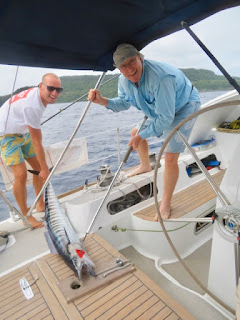 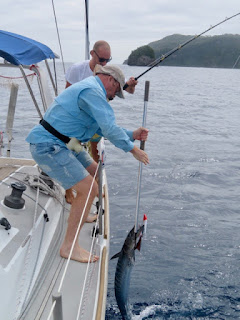 Nicki here from Neiafu, the port of entry into Tonga's Vava'u group of islands. We are currently sitting at anchor opposite the wharf waiting for our turn to go alongside and receive the Tongan immigration officials for clearance into the Kingdom of Tonga - unfortunately there is a long queue as many of the World ARC boats have recently arrived; sometimes travelling with so many boats on the rally has disadvantages.
We had a good sail from Nuie ~ 250 nautical miles pretty much along the rhumbline with a decent sailing breeze most of the way, largely forward of the beam so we used plain sails rather than our downwind sails. After a glorious starry night departing Nuie we had mainly cloudy skies thereafter - with occasional torrential downpours (notably usually when I was on watch!)
On passage we enjoyed watching whales blowing and broaching, with the juvenile whales leaping spectacularly high out of the water; Rob was the eagle-eyed whale spotter on both occasions.
Pim requested to take on the role of skipper for this specific passage, to build up his sailing experience. He took his responsibilities very seriously and managed the boat speed carefully to ensure that we made our landfall into Tonga during daylight hours yesterday afternoon. (He also paid great attention to sail trim throughout - now nicknamed 'Pim the Trim' and is proving his extended range of skills by cooking pancakes for breakfast for us all right now).
As we sailed around the high limestone cliffs to make our entry into the sheltered harbour of Neiafu, Richard hooked a beautiful big =][wahoo which was quickly gaffed, bled out over the transom and then filleted on the foredeck with help from Pim. It tasted delicious for dinner last night! We anchored in a small quiet bay just outside of Neiafu and celebrated crossing the date line - thereby missing a full day (nominated to be Nuie's Saturday)with a few glasses of wine.Our arrival was on Sunday in Tonga, which is a very Christian country, and we heard church bells and people singing hymns, but otherwise it was very tranquil and quiet with few signs of life ashore. (Swimming is forbidden by law for Tongans on Sundays).

Today dawned grey and damp, with the weather forecast indicating more of the same with strong winds later today - so a good day for going ashore and catching up on emails etc. Jo flies back to UK in just over a week so we hope that the sun shines for us all later in the week so we can explore and enjoy diving/ snorkelling, before various WARC functions over the weekend prior to Tintin heading on to Fiji with target departure on Tuesday next week.

The fast pace of the World ARC is challenging - by comparison when I cruised in the Vava'u group with my own boat 'Rhumbline' 18 years ago (yes really it was that long ago!) Mike Forbes and I enjoyed doing 'nothing much at all' in the anchorage at Port Maurelle for nearly a week!

All is well on board Tintin - the only minor gear failure on passage was a cupboard door latch in our cabin: fortunately Rob and Jo have a job lot of spares.