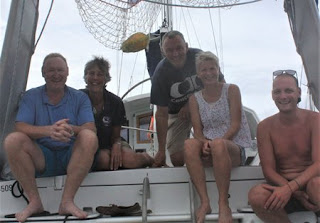 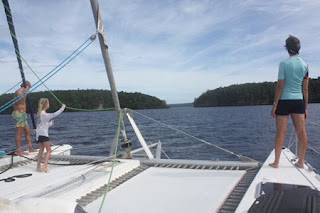 We're currently on a mooring buoy in a small anchorage off a desserted
islet in the Vava'u group of islands. The weather is grey, damp and
relatively cool and we're having a very quiet morning hoping that the
weather will clear so that we get good visibility for snorkelling and
diving this afternoon.

After our arrival in Tonga, we had a happy evening meeting up with most
of the WARC fleet. Some of them we hadn't seen since Tahiti, so it was
good to chat and share a beer or 2. On Tuesday, we left the town of
Naifu and went to an anchorage called Port Maurelle - no visible
signs of habitation ashore, but quite a few non-WARC boats.
Generalising hugely, I think that Pacific islands east of here are
generally visited by yachts heading west across the Pacific whereas
Tonga and islands eastwards are often visited by boats coming up from
NZ for a season and the most common flag for yachts around here is NZ.

Yesterday, we visited 2 caves - both spectacular in their different
ways. In the morning, we hitched a lift with our friends on Charm to
go to Mariners cave. Invisble from more than 10m away, its entrance
required a dive underwater for several metres before emerging into the
airspace. I was first in and it was slithly unsettling heading into
the blackness with just a hope that I wasn't going into a dead-end
cave! Once in, as the water surged in and out, the pressure in the
cave changed
- very noticeably in the ears, and also by the sudden appearance and
disappearance of mist as water condensed and vapourised with the
pressure changes.

In the afternon, we went to Swallows cave - a much bigger cave
accesible by dinghy. The afternoon light was slanting in lighting up
thousands of little bait fish taking shelter in the cave. Free-diving
among them was wonderful as the shoals moved this way and that. Pim
goes deeper than the rest and it was something out of a nature
programme seeing him swim under and through the fish.

We then moved onto this anchorage and were joined by Charm and Aurora
B. We had a memorable evening on Charm with many laughs and even some
serious conversation. Apparently, the video of me trying to get an
After 8 mint from my forehead into my mouth using only facial muscles
is quite amusing. Hmmm.
Posted by Rob Withers at 23:38