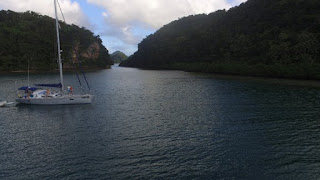 After clearing into Fiji at Lomoomo in Vanua Mbalavu, we've had the
chance to slow down for a few days. We moved north to a small bay,
co-incidentally callen 'Small Bay'. A narrow entrance led to a
steep-sided bay about 200 in diameter with a further, narrower channel
leading to a larger inner bay. It would be possible to get to the
inner bay at high tide, but we contented ourselves in the outer bit.
Echoing around the bay were what sounded like monkeys, but actually are
oriental barking doves - making a big noise for such a small bird. We
met another english family there, anchored in their aluminium lighting
centreboard boat. They are approaching the end of a 3 year voyage and
planning to return to the UK so their 2 sons can start secondary school.

While their we were approached by Tui, 'caretaker' of the local land.
He asked that we do Sewu Sewu. For the those unfamiliar with Fijian
custom (i.e. most of us) whenever you anchor in a new area, it is
polite - almost a requirement - do do Sewu Sewu with the village
cheif. This consists of presenting him (never her) with some Kava root
which hey make into a slightly hallucinogenic and very unpleasant drink
which is ceremoniously prepared and drunk. After that, you're free
to anchor and visit the village and surrounding area. Tui was on
only the caretaker - not the chief - so he couldn't or wouldn't
perform the ceremony, but was keen to take the portion of Kava,
supposedly for the chief to use later.

Next day we motored with some intricate navigation through coral to
the Bay of Islands. Its a small area of small islands, all with
steep limestone cliffs, undercut at water level giving a maze of
stunning little bays and ancorages. We're now ancored in one of
these small bays, tied back to the cliff to stop us swinging into the
other side. Yesterday afternoon, Joe from Charm took us climbing uo
one of these cliffs - the initial 7ft from dinghy to vertical cliff
was the most difficult, The rocks are firm and great for climbing,
so I climbed as high as I dared before dropping back into the sea.

There's some rough weather predicted for the weekend, so we're going to
set sail this afternoon for Savu Savu where there is good shelter.
Posted by Rob Withers at 23:53