Hello, Nicki here,
Tintin arrived into Fiji a week ago clearing into the beautiful Lau Group of islands; since I now have good communications I am catching up with some images from the last several days (and filling time while it is raining heavily at our mooring here in SavuSavu!)
We had a lovely downwind sail from Vava'u, Tonga to the 'Tongan Passage', a pass through the fringing coral reef which surrounds Vanua Balavu.  We had an uneventful landfall, however one of the other WARC boats Aurora B had a problem with their engine just outside the reef, and so they sailed through the pass and to the anchorage, with a number of other boats accompanying them in case of any problem. Fortunately visibility was good which made navigating through the reef straightforward, and 2 dinghies helped them to nose the bow into the wind for anchoring.
While awaiting Customs clearance in LomaLoma Rob graciously moved out of Tintin's forward cabin allowing Richard and me to have more space; of course this prompted the Quarantine and Customs and Biosecurity officials to arrive while there were lots of bags piled up on the saloon table! We were cleared in without issue, and then went ashore to explore - buying crisps and other important rations from the single store and were given papaya and bananas from David, one of the villagers. We walked up to the radio mast to get our bearings and admire the view - noting that a number of other WARD boats were motoring W around the island with the sun in their eyes late in the afternoon, making it very difficult to see any coral heads in the water ahead.  The energetic types joined David's family in a short game of rugby before heading back to the shop for an ice-cream - our first frozen food since Bora Bora! 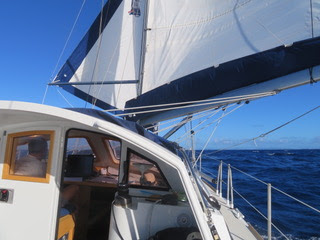 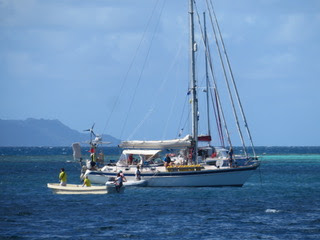 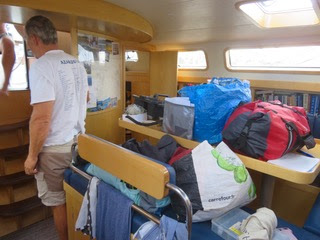 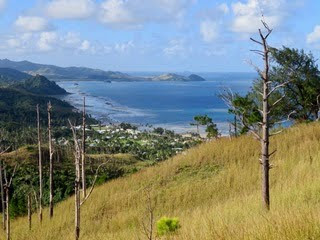