It was an even earlier start than normal. The bus left at 5:30 for the 6 hour drive from Annecy to Rambouillet. Nobody felt like riding anywhere, and Paul looked liked everybody felt with the 1000 yard stare of the returning veteran. 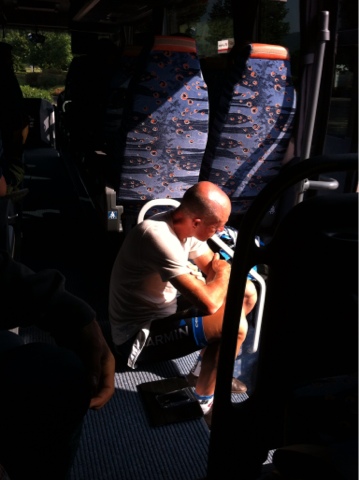 The final stage did not follow the tour route at all. 10 laps of the Champs Élysées is rarely feasible, and on Bastille Day afternoon it's barely possible to walk it once. So it was a 'representation' of the route, starting at a Goat Farm outside Rambouillet, going via Versailles and then finishing in front of the Eiffel Tower.

About 20 supporters - including James - joined with us for the run in to Paris. The early start and ong bus ride was soon forgtten, and the mood was celebratory and frivolous with champagne bottles popping as we rode along. We still had to cover the 60km, so the pace wasn't slow - but James could keep up, which he enjoyed.

At Versailles , we met Jo, Lizzie and Bridget. It was lovely to see them, and there were lots of hugs from supporters. It was a feedstop like the 80 or so previous feedstops: water, snacks bananas and buns - all for 100 people set up without fuss. After a brief hug and chat, we saddled up for the final run into Paris. There was a bit of a hill between Versailles and Paris - which was a bit of a shock, but gave a great 1st view of the city as we came over the top.

Fiddling through the avenues and boulevards, we arrived in front of the Eiffel Tower at about 4:00pm. Much emotion and more champagne - it was a great way to finish. 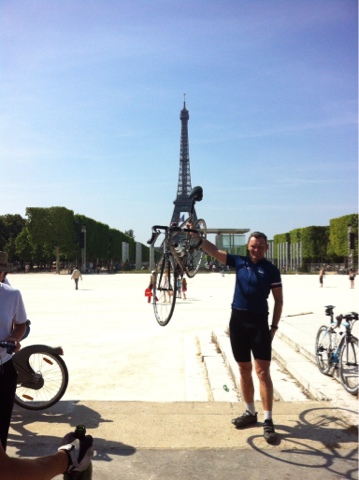 In the evening, we partied on the 56th floor of the Montparnasse tower, looking over Paris and the rest of France as the sun set and the Bastille day fireworks started

Now It's over. Finished. The End. As always with a personal achievement, there is a sense of anti-climax when it's over, but it has been a remarkable 3 weeks. Few people have cycled a grand tour, and the group spirit was tremendous. I would recommend it anybody - provided you can ride a bike well!

For what it's worth - Strava link here