This stage was definitely one of the highlights of the tour route when it was announced last year.  Alpe d'Huez not once but twice in a day.  Obviously, they thought you can't have too much of good thing!  However, that wasn't the only climbing today, with several other chunky climbs.

I was joined by James Heath today, who although not part of the Tour de Force, had been given dispensation to join us for the day.  He gallantly rode alongside me the whole way, even though he could have done it much quicker (he missed out the first climb out of Gap - that must be why he had so much in reserve!).

At the start of the day, we were in mist for quite a while - following the N85 north in the valley.  As we turned east towards the Col d'Ornon the sun broke through, and its was a lovely quiet climb up the valley, surrounded by steep-sided mountains, with some patches of snow still hanging around at fairly low altitudes.  The descent was beautiful - see below 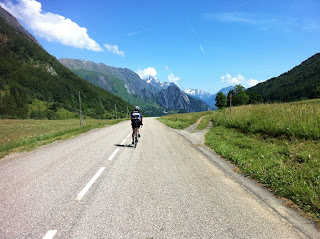 Arriving at the base of Alpe D'Huez is always a bit daunting.  Knowing we had to do it twice didn't help.  As alpine climbs go, it's not the biggest or the prettiest - but it is the most iconic.  There are 21 hairpin bends on the way up, each signposted and this helps psychologically as you can always do one more.  Also, the steepest part is at the bottom, so getting the first 5 bends out of the way helps. 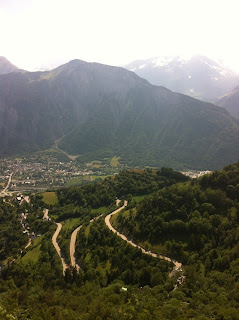 Looking down into the valley from about 1/2 way up.
Plugging away at the climb got us to the top and lunch.  Just another lap to do.  First there was the climb and descent of the Col de Sarenne - a little used road over the mountains going east from Alpe d'Huez. This really was a mountain road.  Steep, narrow with a very rough surface.  The surroundings were majestic - but the riding hard and a bit frustrating.  The descent was steep hairpins on a rough gravelly surface.  There was little opportunity for safe speed and I had to stop 1/2 way down to cool the rims of my wheels.  If they got too hot, the tyres could easily explode.  I hope the pro negotiate it safely next week, because I would really not like to race that road.

Once back in the valley, there was a strange sense of deja vu....except this time it was hotter.  This time we stopped a couple of times to cool down in the roadside streams - shame they weren't there on Ventoux! We finished with an average speed of nearly 20Km/h which I think is respectable given the 15,000ft of altitude gained 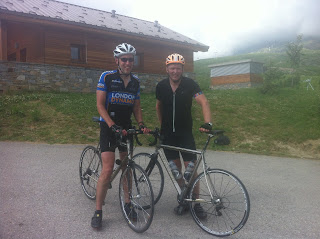 Compared to today, tomorrow's stage is a LONG day - so blog might be late.   In the meantime enjoy the view from the bedroom window 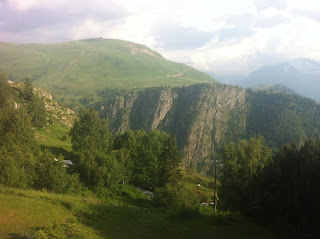