Stage 20 - The last 'proper' stage of the Tour.  None of us can quite believe that we're here now.  Corsica seems an age ago - yet the time has flashed by

The morning came too early.  A late finish after a really long day yesterday had left everybody tired and focusing on getting through today.  That's a bit of shame really because it was a short and beautiful stage and should be enjoyed for itself. 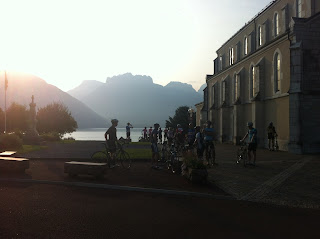 After 4Km by the lake, the climbs start.  This route was chosen by the organisers for this year's 'etape' - this mass participation ride.   They don't choose easy stages - even though this was by some margin the shortest of the tour.

The final ascent of Semnoz was OK.  The kms were clearly marked and it was wonderful to hear the cheers as I passed the resteraunt with 150m to go. 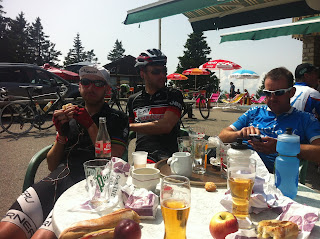 And then ...one of the best beers ever.

There was lots of congratulations at the top - even a few tears - as we realised how far we'rd come as group, and how it's nearly at the end.

Jo and the kids are in Paris, and we've a horridly early start to get driven up there for a celebratory ride into the city.  I'm really looking forward to seeing them again - and to not riding up so many hills - but will miss the experience and the criac hugely