Apologies for the late posting of this.  Yesterday was a long day and I knew we could relax on the only proper rest day of the tour today. 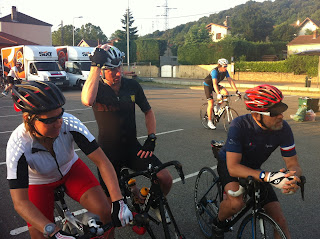 We knew from the outset that it would be scorching hot day, so the initial 130 miles was all about  pacing - regular drinking and eating and not pushing too hard on the hills.  The terrain was beautiful and rolling - lots of lavender fields, vineyards and olive groves - it felt a thousand miles from the damp, grey of St Malo only a few days ago (in fact it's not much more than 650 miles).  The mountains to our left as we went south gave warning that stage 16, to Gap, isn't going to be flat! 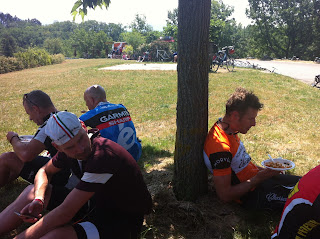 Finding some shade at lunch 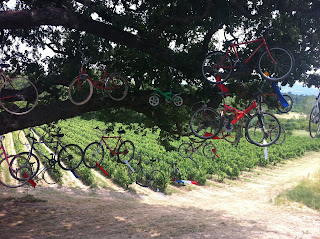 I've mentioned before that I tend to go at my own pace - generally fastish on the flat and through the stops but slowing on the hills.  It has now become rather a joke that I am sometimes overtaken by the same people 4 or 5 times a day and yet I never seem to overtake them.  The impossibility of this has led to various theories such as  I use a car to get ahead or (more fun) that  I bend the fabric of space-time to get ahead while travelling slower.  I tend to think the answer is more prosaic - I stop less and for less time.

Arriving at the bottom of Mt Ventoux at 4:30pm I felt in reasonable condition, but the temperature was scorching - variously recorded at between 36deg and 42deg at the base of the climb.  I started the plod up the hill, very glad to be able to dunk my cap in a well after a few km.  The climb starts gently for a few km before heading steeply (9% average ) up through woods for about 12km.  This section had caused me problems before with the stifling heat and unremitting climb.  However the sky had started to cloud over and as I climbed there was an occasional breath of breeze.  1/2 way up, one of the vans was parked with water and peaches (very nice), and I treated myself to a large caffeine gel before grinding on.

At Chalet Reynard, the road leaves the trees and heads diagonally across the rock-strewn moonscape that caps the mountain.  The top looks an impossibly long way ahead at this point, but it was a case of knocking each km, one by one.  About 5km from the top I was overtaken by Lee - a tiny Scottish lady who must weigh as much as my right leg.  She skipped past with a cheery 'You're amazing, Rob' - very encouraging but it did betray genuine surprise that anybody could haul something the size of me up the mountain.

Jo rang with about a km to go, so after a brief exchange concerning the tennis, I mentioned that I was bit busy and could I call a bit later (I was still pedalling).  In the end, I did reach the top to find a motley bunch of survivors there already.  Some had clearly gone beyond normal limits on the climb and there were tears of relief and exhaustion from a few (only from the men, though - the women are much tougher). 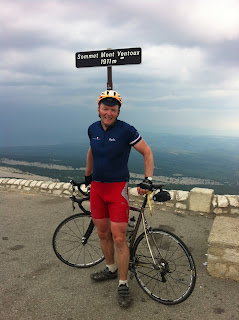 Having the sign attached to my helmet cost me hours!

The sky had clouded over and the wind picked up, and it was time to leave.  As we started the descent, lightning flickered over to the east and I started to feel drops of rain.  The descent is wonderful - very quick and comparatively safe, but I did feel like I was racing the wind down the mountain.  Those who were even a few minutes behind had a freezing cold and very wet descent.

In the end everybody made it up the mountain, although some were bussed back down to avoid the darkness and rain.  It was a lovely relaxed atmosphere back at the hotel, having conquered the longest stage and with the prospect of a day off today.