Today is all about preservation and preparation.  120 miles with 7500ft of climbing in temperatures that touched  and the aim is to finish in better condition than when I started to give me the best chance to finish tomorrow's monster stage in good shape.

An early start today with an hour's transfer from one rather anonymous bit of central France to another.  As you can see from the photo, all the riders were eagerly enjoying the scenery 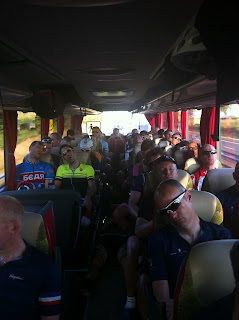 At the start, the fields were covered in mist, and it was bit chilly.  I started alone, but was soon joined by 'L'autobus ecosse' - the well-drilled group of Scottish riders.  I was honoured to be allowed to lead them for 15km to the first feedstop.

Then rolling terrain makes it tricky to find a group going at my speed, so I did much of the day alone - losing time on the climbs and making up some of on the flats, descents and feedstops.  Lunch was at the highest point - some 2500ft up.  The temperature started to climb so it was important for today - and tomorrow to keep fully hydrated 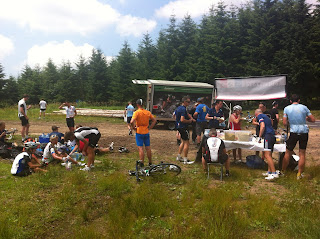 It was a long down run into Lyon, and then some irritating climbs around the city to mimic the tour route around town.  Having seen much of the city, I don't think I need to see more.  Much of it appears to be a monument to modernist town-planning from the 1970's.

Back in time to see Frome grab the real Tour by the scruff of the neck.  The pace at which he climbs is astounding!

Tomorrow will be a late finish - even if all goes well.  220 km and 4 categorised climbs BEFORE tackling Ventoux.
Posted by Rob Withers at 17:29
Newer Post Older Post Home