We updated our trip report with Taupo Maritime Radio (ZLM) on the SSB radio twice daily, with the transmission frequency and signal strength/ readability varying with the weather and propagation conditions.
The SSB weather forecast was for 30 knots from the S/ SW and 'heavy swell' behind the front which we anticipated should be easing as we approached NZ (although notably the GFS GRIB files which we received via the satellite phone indicated much less wind than this - we had noted this repeatedly in New Caledonia so the actual wind speeds were not a surprise. )
Indeed, the sea state increased dramatically and very quickly, over the space of less than an hour during the night (of course) Wednesday.   We had lots of squally showers with winds of up to 30 knots, but most of the time we were powered up in 22-25 knots with 2 reefs in the main and 2 in the genoa, living at an angle of ~ 20 degrees. Suddenly it became very difficult to sleep even in the stern quarter-berths.  Everyone clipped on their harness from the doghouse, before climbing out into the cockpit. 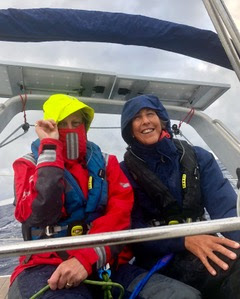 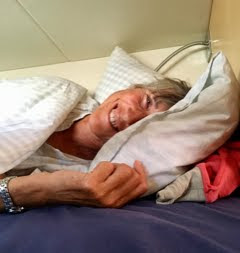