Tintin is now in Noumea once again - we are re-sending some messages from a few days ago in the Isle of Pines which for some reason were rejected ….
A lovely sunny day arrived, as promised, so we set off an hour before low tide to walk around the island. Ilot Brosse is interesting in that half of it is gorgeous, gently shelving, white sand with classic New Caledonia Pines (Araucaria trees) while the other half is raised limestone with coral terraces and relatively low lying scrubby vegetation.
As we left the white sand and started to walk alongside the raised limestone shoreline there was splash int he water as something fell from atop the limestone - it was a sea snake - apparently there are 12 species of sea snakes in New Caledonia, the type that we observed here is the "striped Jersey sea snake". While not aggressive these are the most venomous of sea snakes and their venom is typically fatal and there is no antivenom available. The locals have a saying about the sea snakes "Leave them alone and they'll do likewise. If you kill one, it'll bring bad weather", so, much as Nicki could do with a new handbag, I quelled the hunter killer instincts.
The striped Jersey sea snakes spend as much of their time out of the water as in it, that explained the impressions in the sand that we observed in the white sand and as we ventured along some paths through the undergrowth on the island we found more snakes on-shore as well as some shed skins…. 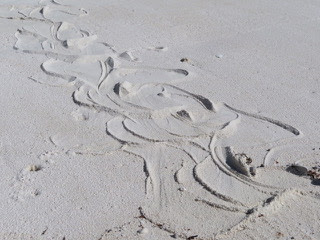 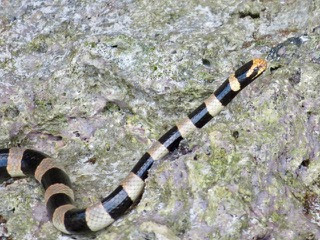 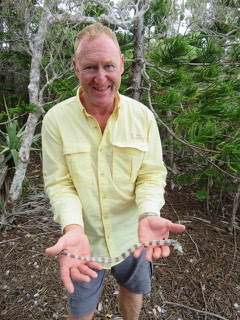 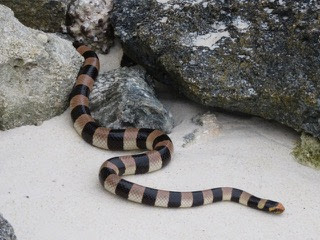