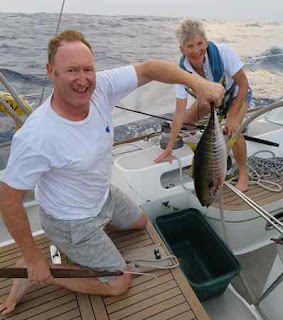 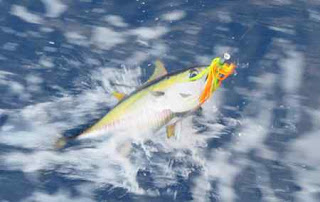 Richard here - We managed get some fishing action in on our trip between
Santa Marta and the San Blas Islands, the sea state was rough for a
while but we trolled a large skirted lure - one big hit which took
plenty of line and eventually the hook......the 250lb leader was badly
frayed so whatever it was had sharp teeth..
Later we hooked a beautiful Mahi Mahi which put on a great aerial
display showing off its magnificent blue and golden hues, along side the
boat we reached over the side with the gaff just as the Mahi Mahi gave
one last jump and threw the hook. Just on sundown the line ran away
again and this time we were not to be thwarted as we pulled in a
yellow fin tuna. Sashimi for lunch on arrival into the San Blas
Islands and the start of us topping up on our Omega 3's.
Comparing notes with other boats and a mixture of Mahi Mahi, tuna and
one small blue marlin caught on the journey.

Lots of flying fish in and above the water - so many that in the
sunlight they look like flocks of small silvery birds - a deck
clearance required most mornings to remove those that didn't manage to
make it back off the boat deck after taking flight from our passing
close by. Fewer sea birds than I would have expected to see, the
occasional gannet like bird diving but other than that not much bird
life. Some pelicans and herons in the San Blas Islands. Some of the
other boats have keen fishermen on board one of which is planning to
detour North after we have gone through the Panama Canal to wet a line
on the Hannibal Bank which apparently is world renowned for its fishing
- especially big Marlin. We'll have to wait and see what the Eastern
Pacific brings....
Posted by Jo Withers at 23:38