Continuing our cruising tour of the lovely Havannah Harbour and surrounding islands of Efate, we sailed from our anchorage in the far end of the harbour, around Moso island, and up to Nguna. Nguna is a small island created at the confluence of two extinct volcanoes, creating a beautiful, hilly landscape that feels very far from the 'big smoke' of Port Vila. We anchored in a little bay out front of a village named Utanlangi, along with some Arc friends on the beautiful Cabana.
In the morning, we ventured in over the very shallow reef towards the village and met Shem, the son of the chief, on the beach. He was wonderfully open and up for a chat, and brought us to meet the rest of his family. His three sons live on the island with him, with his daughter living in Australia. His wife was busily polishing some seed pods that were to be sold in the markets of Port Vila, and his sons all seemed to be busily working on various projects around the home and village. In spite of the fact that everyone seemed to be mid-task, Shem (and his shyly curious and friendly young granddaughter Stefanne) took time out to take us for a wander around the village, showing off their water infrastructure, talking to us about the building (and re-building post-cyclone Pam) going on, and giving us a chance to meet a couple of the other folk who live there. Getting this view into their lives and being able to share experiences with Shem was such a highlight of the week.
Utanlangi is an immaculate village, with well-built laneways laid out in a grid, water standpipes shared by neighbours, and fruit trees abounding. We had brought several little items to the village to thank them for their hospitality in letting us anchor out front of their homes, but through our discussions, we found out there were a few additional things that would be of great use. Happily, we had a couple these items (notably, an inner tube - for slingshot purposes - and some toothpaste), back on the boat. In a show of great generosity - given that the village makes a subsistence living on what they can sell in the markets and/or produce themselves, Shem's family sent us off with whatever they could spare - fresh coconut water, bananas, and pomelos - all of which were a great treat.
We came away from this visit with one regret: we had no football to give to the village. They have a great, flat football pitch, but, tragedy of tragedies, Shem told us that they had just punctured their only ball. We kept thinking about this as we returned to Port Vila, and on our last day in Vanuatu, we came up with a plan. It turned out that Lamara, the marina manager, is actually from Nguna, and if we wanted to send a football to Utanlangi, we could do it through her and her connections! FedEx doesn't hold a candle to this most local of 'postal' services - we bought a ball, wrote notes to the village, and sent it off one afternoon, and it was en route the next morning bright and early. Here's hoping it's getting some great use on the top notch football field of Utanlangi by now!
-j 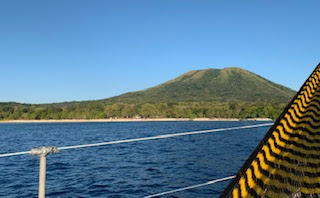 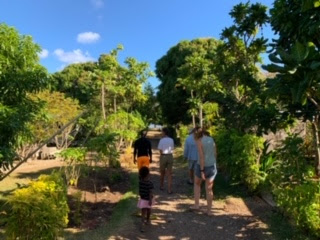 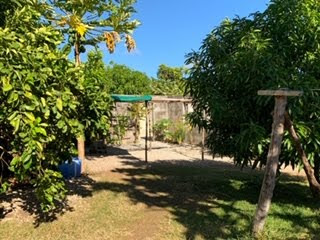 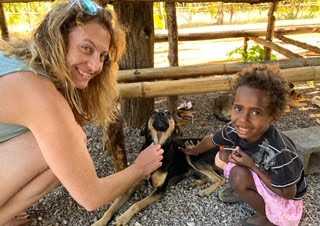 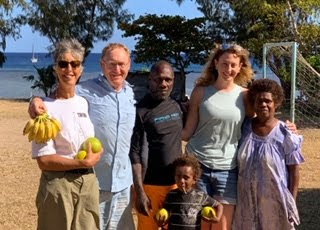