450 miles under the keel

Tintin has arrived in La Coruna, at 4;30 am today. We were treated to
memorable encounters during the crossing of Biscay. We saw the sea
depth change change from 150m to over 4000m as we traversed the edge
of the continental shelf. The Atlantic swell, sizeable to start with,
gradually reduced over the passage and our horizon became flatter. As
well as the magical regular visits from dolphins, we saw whales 3
times - cruising along the surface, blowing a fountain of spray from
time to time. They seemed to ignore us completely as they serenely
continued on their way.

Yesterday we became aware that the engine seemed to be vibrating more
than it should. A video shot over the stern showed that we had rope
around the propeller. James was voted to have the opportunity to be
hero of the day by jumping in , diving down with a knife and freeing
the prop. The bike helmet was to protect his head form the hull - the
boat was slopping around in the swell a lot.He surfaced after the 5th
attempt victorious with an armful of rope and fishing net. The girls
jumped in too for a quick dip in the deep blue sea.

Later in the afternoon, the wind returned allowing us to sail on a
broad reach for the last 70 miles. The sky as we approached Spain was
so bright with stars, until a huge orange moon rose and lit our way as
we navigated into harbour, led again by dolphins at the bow (who woke
Rob, asleep up for'ard with their squeaking).

Now we are enjoying the luxuries Coruna can offer: hot showers, a calm
berth, and dinner ashore. Lizzie has arrived to join us so now we are
6. 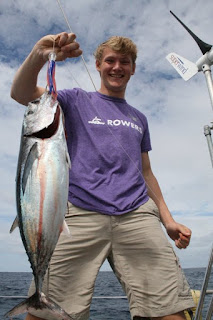 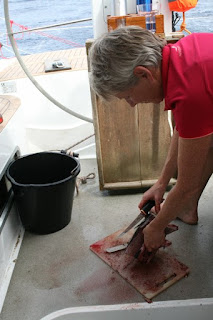 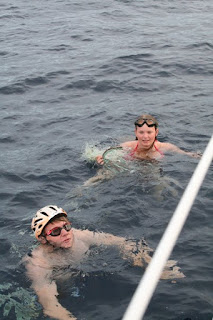 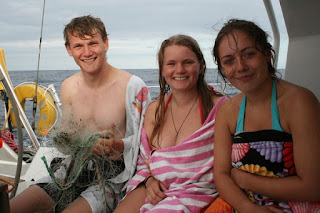 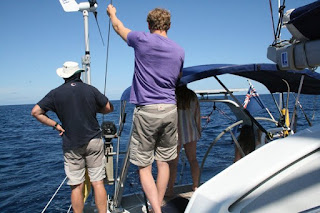 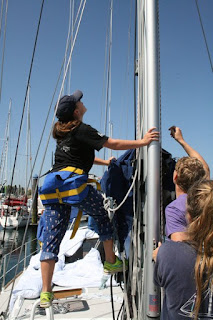