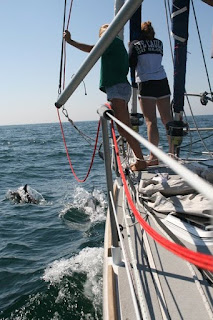 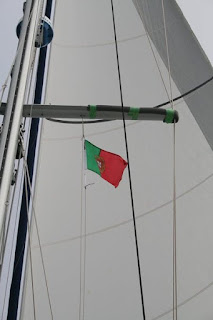 We had gentle northerly breezes for the first 12 hours of our leg from
Baiona to Peniche, but then the engine was needed as the wind died away
in the evening. With just a thin new crescent moon, the stars were
brilliant during our night watches. We passed a few fishing boats but
there was little other traffic. As it grew light, the day became grey,
and visibility reduced with it.

The Portuguese coast along this stretch has a limited number of safe
havens for boats. Much of it is low lying, and is subject to swell from
the Atlantic - most of the harbours have man-made walls to provide some
shelter. As we neared Peniche the cliffs of Cabo Carvoeiro loomed into
view, and we decided against anchoring at Isla Berlenga, a nature
reserve a few miles off the cape, due to the poor visibility. We hoisted
the Portuguese courtesy flag before we entered harbour, to oil the
wheels of the inevitable bureaucracy that is so much part of visiting an
overseas port.
Posted by Rob Withers at 19:04