Tintin is in Lisbon 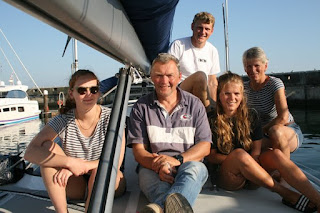 Peniche and Cascais share the fact that they are both citadel towns -
with medieval castles protecting the town.  They are also both on the
coast (obviously).  However, other than that, they could hardly be more
different.  Last night we were lit up by the lights of the factories,
with a loud hooter echoing across the bay every hour or so.  Every so
often we were rocked by the wake of a passing fishing boat.  The air was
cold and light was grey - and it is apparently generally 10 degrees
colder than inland.  After 40 miles of motoring and 5 miles of really
nice sailing (why couldn't the win have arrived earlier), we have
arrived in Cascais, just outside Lisbon.  The air is clear and warm.
The marina is full of well-maintained, smart boats.  On the way to the
showers James and I passed a Ferrari and a Rollls-Royce Corniche -
perhaps guest of the wedding whose jazz band we can hear wafting over
the harbour wall.  It's a much smarter place!

Which is nice, because this is the end of Stage 1 of our trip and Tintin
will be staying here for 3 weeks.  We have 2 days of surfing & culture &
boat maintenance, depending on which generation you're from, before we
return to the UK on Tuesday
Posted by Rob Withers at 19:26