Scene: The briefing room overlooking a swimming pool.  Moon starting to rise over the mountain.  Excited chattering from everybody.  This is a verbatim description of the briefing (maybe)...

" My name is Sarah, codename Jester, and I'll be looking after  you for the next 3 weeks.  In charge will be Phil Deeker - codename 'Viper'"
"Good afternoon gentlemen [and ladies]. You are the best of best - the top 1% of British cyclist - Our job is to make you better.  Over the next 3 weeks you'll be put in over 20 stages with points awarded for successful completion of each mission - at the end, the person with the most points will be awarded the 'Top Gun trophy'. Good Luck.

OK, he didn't really say any of that, but the atmosphere was similar - everybody scoping out each other.  Shaved legs vs hairy.  skinny vs (ahem) less skinny.  Lifers (i.e. those doing the whole thing) c.f. the rest.  The are 40 lifers and about 35 here for a shorter time.

Stage 1
Stage 1 was long - 212km, but basically flat.  The first 60 km was a loop around the south of the island before returning to Porto Vecchio.  The first hour or so of each will be 'neutralised', which means everybody willl cycle as a group (or in 4 groups) and at a pace that everybody can maintain easily.

The road then turned north and went along the east coast of Corsica for 90-odd miles to Bastia.  There was a cross-tail wind that flattered the average speed, but even so, I felt pretty good.  I was in a group of 4 and we took turns on the front.  Gradually, the others seemed less interested in going to the front, so I finished slightly ahead of them, a few minutes behind the 1st group to finish.  This stage played to my strengths, and I have few illusions about maintain that formed when the road heads up!

Bastia is lovely - very quaint and run-down in a chic Mediterranean way.  We're staying in an ancient hotel overlooking the harbour 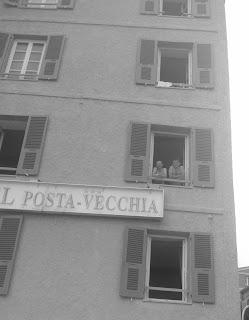 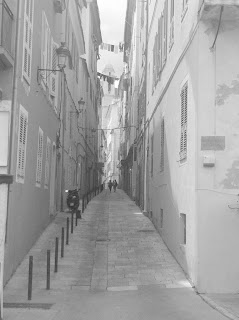 Tomorrow we head across the mountainous centre of the island - shorter but slower
Posted by Rob Withers at 17:46
Newer Post Older Post Home