Stage 9 - St Girons to Bagneres de Biggore (and then some)

Just a quick post because it's late and I want to go to bed.  Tomorrow is a rest day (= day in a coach) so I can elaborate then.  But the basics are: 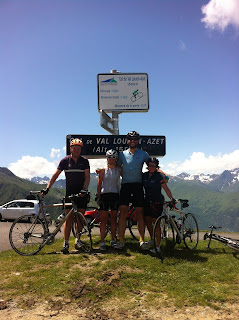 top of the last climb
Supplement:  on the coach northwards
The stage from St Girons started very early - with a 6am coach from Ax Les Thermes. The coach was late a Sarah looked dressed for the 1st time, which is amazing given what she is organising.
We started at about 8:00. The ride had 5 categoried climbs all cat 1, except the 1st - the portet de Aspet.  Conditions were perfect, with light cloud being burnt off by the sun.
A steep descent passed the Cassertelli memorial, a large carved alabaster memorial to a talented young rider who died racing down that road in the Tour in 97(?).  he came off on a steep corner, hitting his unhelmeted head at about 100kph. i came down much gingerly - and safely.
The 2nd climb was the Col de Mente.   Breakfast felt small and a long time ago at the bottom, and I was very hungry by the top .  Here we learnt there had been some fallers.  Some guy had clipped a back wheel on the run in to 1st hill and brought and brought done some others.  Just road rash.  However, potentially more seriously a girl called Peggy had come off on a descent and banged her head.  She couldn't remember how it happened, but her day was over and she was put in the van under observation (she's fine now).
A long descent went past St Beat.  The village had been decimated by flash floods 2 weeks ago and there was still debris everywhere.  Some houses that back onto the river were virtually destroyed, with walls ripped out and mud everywhere.  Large clumps of debris were caught in trees some 10ft above the still high river levels.
Along the valley to Luchon before the col de Perysoude.  Having done this previously from the other side, I thought I knew it - but it longer and harder than I remember, with almost 1000m of ascent.  I plodded on at my own pace.  News of a couple more fallers at the top - 1 from a front wheel puncture on a descent, the other caused by taking a gravelly corner too quickly.  Both caused nasty grazing and 1 chap, Donald, decided to sit out the rest of the stage. But he'll be back.
Lunch (at tea time) was in St Lary, where Bridget , Lizzie and I went canyoning a couple of years ago.  The food was very well received - it seemed to have more flavour than the normal paste in green or beige.
The 4th climb ( not final as labelled ) zigzagged up the side of the valley giving great views back to the Perysoude.  A very fast descent (80kph at times) required care because they had put gravel on some of the corners.
At the base of the last climb, l'horquette d'ancizan, my legs felt extremely heavy, but after a few km grinding away lunch reached them and the last 1/2 of the climb sped past. 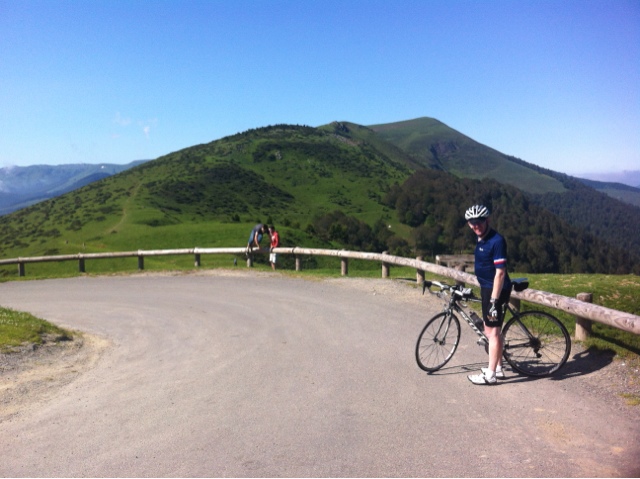 There was a long descent to the official end of the stage, and then a 20km bonus to get to our hotel.  Everybody was pretty tired at the end.  About 3km from the end, one lad, Shien (from Malaysia via Rugby) came round a corner to find a car reversing out of a drive.  He came off and unluckily broke his collar bone.  That's his tour over but he seems remarkably sanguine about it.
Yesterday's stage marked a definite turning point.  Corsica and the Pyrenees are done, and we have a few days before the next real test.  It's now just the 'lifers' on the coach and there's a sense of camaraderie building that I hope will see everybody through any tough times. 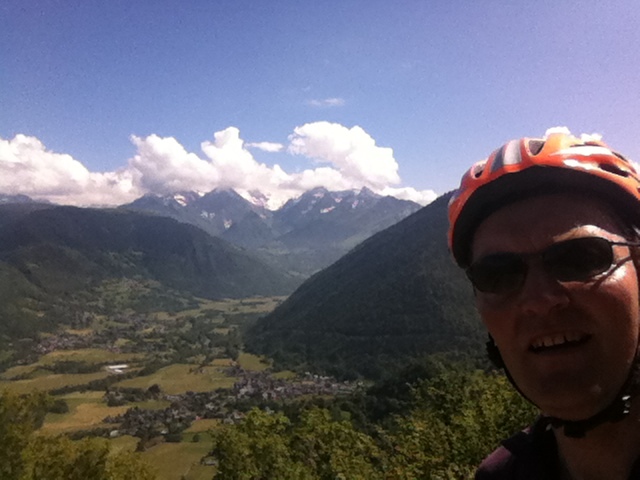