Stage 2 - Across the middle of Corsica

Stage 2 was billed as being shorter, but with some proper hills.  In fact it turned out longer than advertised ('Viper' had 'improved' the route), nut was properly hilly.

The 40km neutralised section gradually became less neutral as the young guns - who have yet to establish who is Iceman and who is Maverick - couldn't resist raising the pace.  After the 1st feed stop, the gloves came off.  Along the flat, I'm fine keeping up with them, but when the road turned up, they seemed to barely slow down - but I did, and immediately ejected from the back of the group.I would like to say that they are all 1/2 my age and weight - but its not true.  The picture shows one of the team doctors, Col, having a coffee waiting for everybody else 1/2 way up the climb. 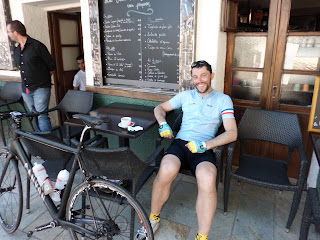 The climb meandered on - mostly at a fairly decent gradient - through scenery like this to 1100m height. 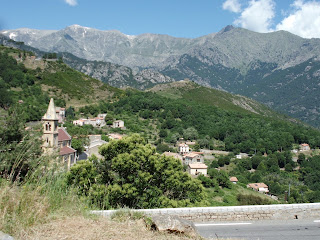 The decent was very quick, with sweeping bends and a good surface. Lovely.  However on the valley floor there was a strong headwind, and I was very glad to be in a group of 3 working well together.  We kept it over 20mph into the wind but when we arrived in Ajaccio I was finished.  Which was a shame because there was an extra 12km loop rising 200m above the town before finishing along the seafront.

The group is gelling well.  2 awards each night - a plastic rocket for 'unbecoming' behaviour and a 'chapeau' for kindness/helpfulness etc.  So far there have been no serious 'rocket' events - although its awarded every day anyway.

Tomorrow is a shorter - but very undulating stage north the Calvi.  Should be time for a swim before catching the ferry.