Today was the last 'transition' stage before the Pyrenees start tomorrow - but it was a tough test in itself.  210km with 4 categorised climbs.  However what made it tougher was the strong mistral wind and cold damp weather.

The route climbed unsteadily out of Montpelier - lots on undulations with each up longer than the following descent. I managed to lose the entire route leaving Montpelier (having been in the middle), and arrived at the first feed stop 1st in glorious isolation.  The flattish section before the big climbs started was very windy and I was glad to be in the group 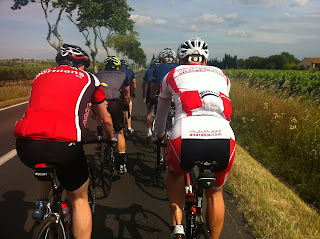 Sheltering from the wind

Once the climbs started, I reverted to my normal pace, and passed through the Col of 13 winds on my own (actually, all the winds seemed to be fairly well focussed!).  Another descent and the 2nd feed stop came before the biggest climb of the day up to 900m.  Anthony paced me up most of the climb, but the 15 mile section after that was hardwork.  Constant up and down, all around 800m with buffeting from the wind took it's toll and I was very glad of lunch - which was a veritable mountain of pasta.  From then on, I cycled with Anthony, which is less stressful than peleton riding, but less hard work than being on your own.  Intermittent rain kept us on our toes on the descents - but was also a bit chilly. Just before the last feed stop, I dropped my water bottle onto my garmin computer - breaking the screen.  I think all the computing electronics are fine - but the screen means the results stay locked in the little box.

We're now in Tarn region - steeped wooded hills looking quite like Devon in places.  Plenty of ruined history to wonder about 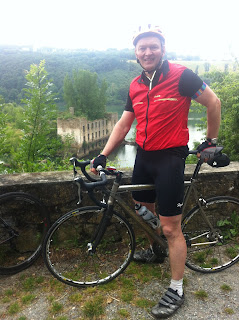 The descent into Albi was lovely - little traffic until the last couple of miles.  Albi is a magnificent old city with an amazing cathedral.  Unfortunately we'll only see the Ibis hotel, which is less lovely!