Today's stage was flat and fast.  At 105 miles, it wasn't particularly long, so was billed as 'recovery' day.

We had to get up even earlier than normal to get a coach from Marseilles to Aix - about an hour, but a bit dull at that time of the morning.  So it was 8:00am before we rolled out from a car park on the outskirts of the town.  The first hour or so was slower, with cars and few bumps, but soon a group of 10 formed working well together.  Going 2 abreast and being on the front for 2 minutes.  At the 1st feed stop, the group increased to 20 or so and we worked as a group all the way to the finish (except on the only categorised climb where I once again got dumped). 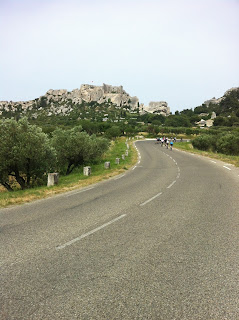 A familiar sight - the group disappear ahead as a climb starts.

The mistral wind piped up strongly from the north - every right turn slowed the group by 5mph or more, left turns were well received.  Crossing the Rhone, the wind was very strong, and everybody had to lean them well over to the right to stay upright (if you see what I mean).  When the route had a bit of south in it, and the group was working, we hit 30mph on the flat fairly easily.  The miles flew by.

Tomorrow will be different.  Longer and with 4 categorised climbs.  However, I'm feeling stronger than day 1, which is a good sign.
Posted by Rob Withers at 15:18
Newer Post Older Post Home