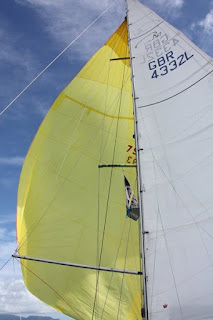 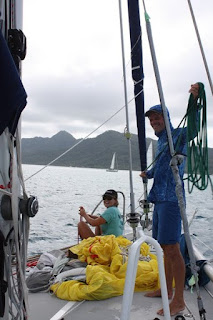 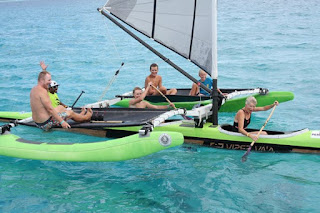 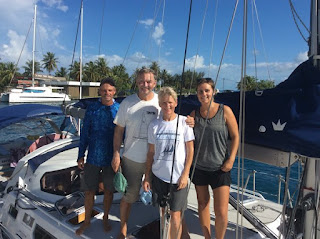 We've had a very hectic few days at the Tahiti Pearl Regatta.
Apparently it's the foremost (only?) international sailing regatta
within thousands of miles, and we thought we'd have a bit of fun
putting Tintin through her paces.

The regatta started at Raiatea. Our crew is mixture from other WARC
boats. Joe from Charm is our racing consultant. Quite why he wants
to race on battleship Tintin when his own boat is MUCH faster (254NM in
24 hours across the Pacific), I'm not sure - but he really seems to
enjoy the challenge of making Tintin move, and we are really glad to
have him on board. Josie is also aboard for a few days, having been
released by Raid for the duration of the regatta. She's a marine
biologist and has has provided many interesting insights - not least
explaining the 'spy-hopping' behaviour of a pod of Pilot whales we saw
when coming across from Moorea. Pim is racing on Nica - the fastest
and most photogenic boat in the fleet.

The practice race on Wednesday went well, but Thursday was less
successful. It started badly when Joe discovered a laptop and wallet
with cards etc stolen from their boat while they slept. He heroically
dealt with the hassle and police bureaucracy before the start, but
during the start sequence, we were involved in a collision with another
boat. Moving fairly slowly, we T-boned a lightweight racing
catamaran. There was only going to be one winner of that impact!
Fortunately damage to the other boat was limited to a smashed window,
bent chain plate and cracked daggerboard. The skipper, when we met
afterwards, was very reasonable and we are on surprisingly good
terms. Tintin was completely unmarked. The 3rd thing that day was that
the genoa on Joe's boat, Charm, ripped at the head during the race,
which will require major surgery.

Anyway, the race was a beat for 22Nm east back to Huahine. It's not
Tintin's best point of sailing and we were near the back of the fleet -
and subsequently asked to retire due to the start line incident.

Today was a new - and better - day. Same distance but downwind back to
the island of Taha'a. Using Charm's v large yellow chute we kept up
with larger and supposedly faster boats, with an exciting finish
through the narrow pass in the reef in a squall, dead down wind, dodging
a sailing canoe and neck and neck with a larger yacht. We were in time
for impromptu drinks on big, green, superyacht Nica and a paddle in one
the amazing 3-man Va'aa sailing canoes that are doing the regatta. Jo
(not Joe or Josie) has been helming all the time, and has been doing a
great job while I just pulled ropes on the foredeck.

The organisers are putting much effort in producing media for the
regatta, so have a search for Tahiti Pearl Regatta and see some of the
amazing images.
Posted by Rob Withers at 09:23