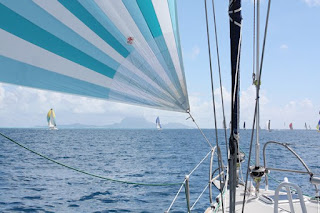 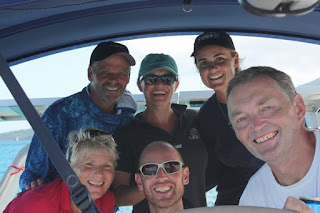 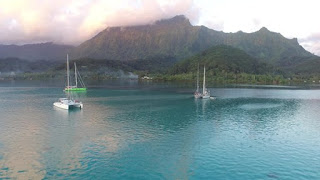 We're currently moored up next to Aurora B in a wonderful anchorage 3/4
the way down the west coast of Raiatea. And today we are doing...very
little. Which is just great.

The previous blog talked about the first 2 races of the Tahiti Pearl
Regatta. The 3rd and final race was a lap of the island of Taha'a,
inside its reef. We had a wonderful day's sailing. The crew of the
previous days was augmented by Ed and Gemma from Aurora B. The start
was shambolically organised, with the line running downwind instead of
upwind as in the race instructions. We realised this about 3 mins from
the start when we found ourselves alone in a great place for the line
with everybody else on the other side of the line, confirmed when race
radio said that downwind sails were allowed over the start. By
accident or design, we actually had a brilliant start - at the head of
the pack with all the colourful spinnakers behind us. Somewhere
there is a picture looking back towards superfast Nica. It won't
happen often! As some of the faster boats overtook us, we had the great
sight of the spinnakers flying against the background of the reef and
Bora Bora. Flukey winds around the back of the island kept the trimmers
busy, and then we beat along the north coast. In the flat water,
Tintin's tacking angles were much better, and it was fun having tacking
battles against large cats, small racing boats and sailing canoes - all
while keeping in the channel.

The party in the evening was great - on a small motu next to the
anchorage. The organising Committee excelled their already high
standards of ineptitude by not including Nica in the prizes for the
cruising division, when they had clearly won. It seems they had
incorrectly recorded the results and not sought to check them. Amongst
the WARC fleet, approaches to resolving this varied - but calmness and
logic won; Nica were acknowledged as worthy winners.

It was a slow start to the day after the party. Jo & the world ARC
women had a ladies day on Nica. Nica is an amazing - very green -
Finot Conq fast cruising boat (See front of Yachting World from Nov
or Dec last year). 54ft, about 1/2 the weight of Tintin and very
fast. They did the 3,000Nm from Galapagos to Marquesas in 14 days and
were there to meet WARC Swade and Andrew from the airport, when SWade
and Andrew were there to greet us! Maren and Gorm are a lovely German
couple who sailed her double-handed around the world and very generously
invited the ladies from the assembled World ARC boats for a day
aboard.

Five of the crews headed south to the bay we are in now. Beyond the
palm fringed shore a sheer bright green mountain wall rises, known as
the 100 waterfalls. After rain, the mountainside cascades with water.
We haven't seen it yet, but we were treated to a beautiful evening
last night when the wall changed from green to gold and then pink as
the sun set. We had a lovely evening invited to the house of Alex,
one of the paddlers in the 3-man Va'aa sailing canoes. Originally from
Europe, he and his family have settled here and he now makes
beautiful lightweight paddles and racing canoes, in a mixture of carbon,
bamboo and local hardwood veneer. His house,
open and airy facing the surf and the setting sun was simply idyllic.
We were guided through the coral reef in the dinghy to his house by
his 10 year old son, Manu, in his own little outrigger canoe.
Why don't we all move here?

Yesterday, we were up early to climb to the sacred high plateau in
the centre of the island. It was a super walk, quite muddy and slippy
in places and almost cold on top. We were fortunate to get good views
from Huahine in the east to Bora Bora in the west with the reef all
around.
Posted by Rob Withers at 02:36