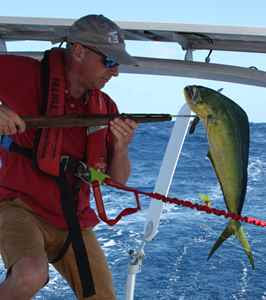 We're now entering the 9th day at sea and have settled into a steady
rhythm. We decided in Las Palmas to have a fixed watch pattern, so
that we don't need to change waking and sleeping times each day. We've
also decided to stick with UTC as we cross westwards, meaning that each
day sunrise and sunset move about 10 minutes later. The day's shape is
determined by the sun and sea and our changing position across the
ocean.

My day starts at 3:50 when I drag myself out of bed for the 4:00 to
6:00am watch. For the first few days, this watch was lit by a
bright moon - now however the moon is thin and doesn't get up until
nearly the end of my watch. In another couple of days it'll be black
all night. We try to set the sails so that there's little or no
active sail management required at night - and thus far this watch has
been event-free, which is just how I like it. By this time of night,
the great bear is visible to the north, pointing the way to Polaris -
much lower in the sky than when viewed from the UK. Last night the moon
rose at about 5:15am closely followed by Venus and then the sun a
couple of hours later. With regular checks on boat speed, direction,
wind and other traffic I content myself listening to audiobooks - and
writing blog entries such as this.

Ben is normally early for his watch at 6:00am. A better person than I
might use the early start to get ahead of the day; but I go straight
back to bed hoping for another few hours of sleep. Whether this is
succesful depends on the weather, sea state and the speed of the
boat. Jo and I sleep in the double cabin towards the front of the boat,
and so get the full sound and movement of the boat.2 nights ago we
were careering along at 8-9kn in up to 30kn of wind. Very exciting but
very hard to sleep being tossed around with the roaring of the waves
streaming off the bows. Last night with winds barely 15knots, Tintin
glided (glid?) gently on - the motion ws a gentle rocking and the noise
a mild whoosh every few seconds. Much more conducive to sleep.

Jo slips from the cabin for the 8:00am watch to get the sunrise but I
just turn over until 9ish. Jimmy is normally up before then sometimes
doing his bums and tums exercises above me on the foredeck. Fred is
next up and if I'm very lucky I get tea in bed (not a skipper's
perogative - he's just very kind). The next couple of hours various
chores get done. The engine is run to charge the batteries, the
watermaker fills the tanks, bread baked, the blog uploaded and weather
downloaded. In the midst of this, the Porridge club turns out another
bucket of the stuff.

Fred takes over at 11:00 and it's time for coffee and Angling Society.
They're making good progress. After the one that got away, yesterday
produced a fine dorado (or Mahe Mahe). Jimmy hauled it in like a
later-day Hemingway before Fred gaffed it onboard. The fantastic
green/yellow sheen faded within minutes of being dispatched in an
alcoholic stupor courtesy of a squirt of 'fish-killing rum' in the
gills.

The radio net is on air at midday. About 10-15 boats share our
positions over the SSB and check on the fleet's wellbeing. It's fun to
get to know the various voices from 'Rum Truffle', 'Chubby Bunny' et al
Conversation can be a bit stilted as boats with better reception relay
information to those further away of with poorer reception.

At 2:00pm Jimmy takes over for the afternoon shift. Lunch has tended
to drift later with the longitude changes, but generally about 3:00.
In Las Palmas we bought a fine Serrano ham (know as Babe II).
Sandwiches of fresh bread with slices of Babe is our stable - although
Ben has been experimenting with lasagne sandwich and other culinary
delights.

Ben is on at 5:00pm. The afternoon is a time for private study -
in whatever way seems best. For me, this often takes the form of quiet
meditation on my bed. I shower and get myself clean just before my
watch starts at 7:00pm.

At the start, 7:00pm was pitch black. Now I get 40 minutes before
sunset, which is a fantastic time for a beer on deck watching the
colours change ahead of us. This is also a time for looking at the
weather and the sails and the course to try to set a sailplan that
would need little maintenance during the night hours.

Dinner - always a fantastic spread - is about 8:00pm. This is a big
subject to be covered in later post.

I finish at 10:00pm to handover to Jo till midnight, Fred until
2:00am and James until I'm back on at 4:00am. Hopefully all these
watches are quiet and event-free.