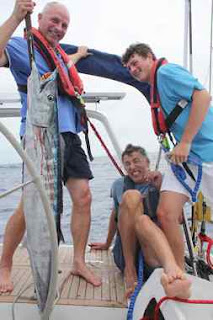 The last 24 hours have been reasonably eventful I think it's fair to
say with a milestone being passed and a new record for our books too.

The story starts at 0600 TTT (Tintin Time) when I rose from my cabin to
take over from Mr Captain Doug and commence my watch. When we handed
over the general message was: everything is going fine, the wind is
blowing us in the right direction, and as always just follow the arrow.
Given we were over halfway and I had done enough night watches the know
what's what I thought I had another dreamy, star gazing two hours ahead
of me. Oh how wrong I was.

The first half an hour went by without cause for anyone's eyebrows to be
raised. After a while I started to get bored of just looking at the
same constellations over and over again so I started to let my eyes
wander further afield. Nothing to worry about on the port side, or the
starboard side for that matter. So I cast my eyes behind me beyond the
stern to see a wall of black clouds looming over the boat. My immediate
reaction to seeing this was to try and get out of the way of the
clouds. After a few moments of thinking how to shift the course of the
boat it dawned on me that there was no option but to tough it out. As
the children's book goes "We can't go around it. We can't go under it.
We can't go over it. So we'll have to go through it."

As I looked more intently I saw that the wall was slightly more broken
up than I had first thought. And the clouds were falling into three
chunks of black scariness. As the first wave hit, I was expecting
strong winds and lots of rain. But the cloud passed without a drop of
rain or the wind reaching more than 18 knots. "How pleasant." I thought
to myself. I was sure the next cloud had to be hiding an infamous
squall that I'd heard all about. But just like the first cloud, the
second passed overhead with me waiting for nothing.

At this point I had the voice of Chris Tibbs, an ARC official, going
round in my head saying "A squall will always hit when the youngest,
most inexperienced member of the crew is on watch." At the helm when the
first raindrops hit the deck, I left Wendy to steer the boat and went
down below to wake Rob up. With an extra pair of hands on deck we
managed reef the sail and slow the boat down to bring a little bit more
control back to the wheel. Luckily we just managed to reduce the sail
area before the wind picked up. As Rob went downstairs the heavens
really opened and the wind picked up. After five minutes of tennis ball
size rain droplets and winds gusting up to 28 knots, the squall passed
just as suddenly as it had begun and I could tick off another sailing
milestone.

As we were sitting down for lunch, enjoying the freshly baked bread and
newly cut ham, we heard a cry of "FISH!" from the deck and after
donning our lifejackets and tethers we rushed to see what we had
caught. As I picked up the rod from the holder, I immediately felt a
huge tug from the other end of the line. It was a big fish.

After a twenty minute battle between the joint efforts of Jimmy Heath
and myself, and the monster at the other end of the line, we had heaved
the fish into striking distance from the gaffer and, after dazing the
fish with a blow the the head, Dad managed to gaff the fish and flip the
fish onto the deck. After a significant amount of rum had been poured
down its gills the fish stopped twitching, and we could set back and
actually marvel at our work. The Angling Society had hauled in a 25kg 5
foot Wahoo fish (some cross between a barracuda and a tuna). After
filleting it and putting it in the fridge we found ourselves all really
quite tired. But my was it worth it.

Now its time for dinner and to enjoy our catch of the day.
This is Ben signing off.
Posted by Jo Withers at 20:13