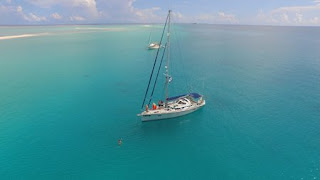 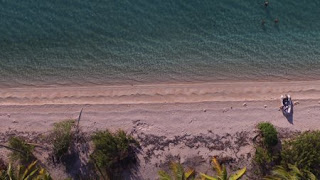 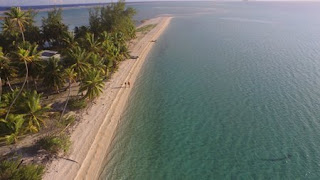 We've been touring around the amazing Tuamotos for 10days. Sadly the
children have to leave to return to the UK, but we had an incredible
time. These islands are straight out of a magazine - crystal clear
azure water with palm fringed beaches stretching out to the horizon on
either side.

After arriving in the north of Fakarava, we headed to the south pass
for the diving....which was extraordinary. We (Rob, Lizzie & Bridget)
we dropped at the ocean end of the pass and drifted in with the tide.
The coral was built up into wonderful towers but the main 'attraction'
was the sharks who congregated there to feed - thankfully not on
humans. As we held on coral to hold us still in the stream, we gazed
out into the deeper part of the channel where there must have been over
50 sharks - mainly black-finned sharks about 1.5m long swimming gently
into the current waiting for lunch to drift. Strangely (perhaps
stupidly) it didn't seem scary and the fish that alarmed me more was a
pair of tuna, about 2m long. They looked positively evil!

From there we went a few miles east to the corner of the atoll, a place
called Hirifa. There was a house there, but no-one answered our
knock. Impossibly beautiful.

We then spent a couple of days and an overnight passage to get here -
Rangiroa - stopping at Tu'au en-route.

I had calculated the theoretical time of low tide at the entrance pass
and we arrived 30mins after that hoping the stream would be mild. In
fact it was streaming out at upto 5knots with large standing waves. it
felt a bit hairy, but Tintin is such a capable boat there was barely
water on deck and all was well.

Today we went diving at the entrance to the Rangiroa pass - on the wall
of the reef as it plummets into the depths. A few sharks this time but
we swam with dolphins. Up to 5 at a time, and one mother with a baby
that the guide reckoned was only a few weeks old. Once the was us from
the surface, they came down to our depth to have a look but we were
clearly more interested in them that they in us. They came quite
closely to have a good look and then drifted slowly away. The whole
thing was very cool.

Bridget was done a video of the kids' time out here which I'm sure will
be posted when she gets decent internet. Worth a look.
Posted by Rob Withers at 23:19