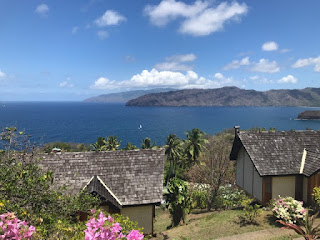 This photo of Tintin making landfall after the Pacific crossing was taken by DJ from Sky, another ARC boat that arrived at Hiva Oa a few days before us. Our arrival marked the end of the most isolated and remote part of this whole voyage, and the beginning of a wonderful time exploring the Marquesas, reunited with Lizzie, James and Bridget.

All the fleet gathered yesterday at Taihoe Bay, Nuka Hiva (the largest island of the Marquesas) for a celebration and an official welcome from the community here. We were greeted again with fragrant frangipani garlands and treated to a display of local dancing by the team from the secondary school (recently returned from Tahiti having won the French Polynesia-wide competition there). Amidst a lot of mirth we were invited us to join in - men to do the Haka and women to learn their bird dance. The cultural traditions run deep here in the Marquesas. One dance depicted a battle between warriors of Hiva Oa and Nuka Hiva. Nuka Hiva killed the Hiva Oa warriors. We were told that then they used to eat their victims, but today they aren't cannibals any more, they like steak frites and carbonara....

We were given a feast in the village hall of goat cooked in coconut, pumpkin in coconut, raw fish in coconut, and little crabs harvested from the rocks that morning. It felt just like a WI event in an English village hall, with a few little differences to the menu. A tattooed fire eater entertained us all just before we ate, ending a 3 hour long dance ceremony combined with ARC rally prizegiving*

Today we have hired a pick up to tour the island. The scenery is magestic and stunning. as Lizzie says, England will seem a bit tame after this. Like Hiva Oa, not all the road is metalled. We have just come around the north coast on the bumpiest of dirt/ boulder tracks (the only road) and have reached the airport where we are awaiting the arrival of Paddy, joining us for the next 2 weeks.

We will be exploring the coasts here for another couple of days before heading off 500 miles southwest to the atolls of the Tuamotos, also part of French Polynesia but very different to the Marquesas. So this afternoon's job is to reprovision Tintin with what we can, including a good supply of pamplemousse which are well received at the atolls. They are grapefruit the size of your head, sweet and juicy, which will keep well strung in a net hammock under the gantry on our stern.

*Tintin won a prize: not for speed, but for the closest guess of the total number of fish landed by the fleet on the Pacific crossing. Awarded new hooks and lures, we know Richard will be very proud of us.
Posted by Jo Withers at 23:59