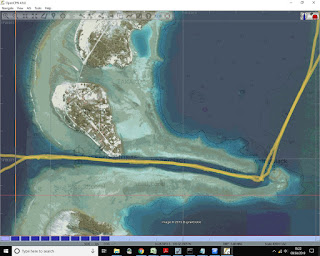 We're now on passage overnight from Takaroa to Fakarava, passing close
to Apataki.

All these islands are atolls, which I would find hard to
believe could exist if I hadn't seen them. Atolls form when
mountainous volcanic islands like the Marquesas develop coral reefs
around their coasts - like Tahiti. The central volcanic islands
is gradually eroded as coral keeps being added to the reef leading,
over countless millenia, to these strange shaped islands. They are
anything from about 5 to 50miles around, thin bands of reef and very
low-lying sandy land encircling a lagoon. The strips of land
('motus') are invariably narrow, typically 100-200m but can stretch for
many miles around the lagoon, often interspered with gaps where there
is just reef - sea between 0 and 3foot deep. Most islands have
'passes' - small gaps in the reef that have been formed by the tidal
currents flushing in and out of the lagoon. The currents can flow very
strongly in these passes as they empty and fill the entire lagoon
through a very narrow gap.

Information about the pass on Takaroa was sketchy. We could calculate
the theoretical time of high and low tide - which is a guide to the
slack water - but that doesn't take into account other factors such as
they need to empty the lagoon of water that is pushed over the reef by
the swell on the windward side. We approached Takatoa about 40mins
before low water. The island supply ship, the St X Maris, was just
leaving - which was just as well as it occupied nearly the entire width
of the channel. It had docked at the town quay which lies at the
entrance to the channel and reversed out on what we thought was the last
of the ebb tide. We entered the channel - James on the first set of
spreaders to look for reefs, Bridget on navigation and the others using
polarised glasses to guage the depth. The tide was still flowing fast
in the channel - about 3 knots, but we could see at the head of the
channel an area of disturbed water where the entire flow entered the
channel from the north over a shallow patch before turning v sharply
west. For those that know it, it was like the tide running out past
Scoble point in Salcombe, but 3 times as fast and with a wall of reef
20m to starboard. The stream took the bow and for a brief moment I
wondered if it wuould spin the boat around completely before the stern
caught the stream as well alllowing me to steer to port. At full revs
we made 1.5 knots through the little cataract before breathing a sigh
of relief as we entered the lagoon proper.

The google earth photo shows our track. Judging from the Latitude
scale on the left, the pass is about 30m wide.

Anyway, safely inside, we poked around for an anchorage eventually
settling on a spot about a mile north of the entrance. It was great to
get the anchor down, safely wedged under a coral head(!) so we could
relax, swim & sleep. Paddy - his first trip on a boat being this
450mile ocean passage - seemed particularly pleased to stop for a while.

Lizzie and Bridget went diving, hunting for sharks and sorting out a
tripping live for the anchor. Lizzie has developed an alarming habit
of shouting 'Shark' v loudly, and then jumping in the water to chase it.

We all slept well and woke up in time to host the radio net at 9:00am.
But we couldn't hear anybody! It's surprising how silly one feels
doing a long, cheerful introduction to the day's net and the get in
return ..nothing. Rather like having a conversation with somebody
before realising they left the room minutes ago.

The morning was lovely. A gentle breeze wafted over the flat sea meant
the boat was cool and flat. All the crew were content to relax
onboard, waving to locals passing in their proa canoes but actually
DOING very much at all.

Leaving the pass was slightly less hairy than entering - we timed it
so the stream in the main pass was pretty slack, but there were still
overfalls at the corner.

We've got a few boat jobs to do in Fakarava:
- rethread lost spinnaker halyard in the mast
- investigate non-reception on the SSB
- investigate gearbox which was re-developed the habit of not
going into gear when asked
- Find out why our tender, Snowy, continues to gradually leak
air.

Blue water Cruising is, indeed, boat maintenance in exotic (in
this case v exotic) locations!
Posted by Rob Withers at 13:55