We're now back onboard in Tenerife, having had a tremendous send-off. Everybody seemed very happy to see us finally set off for the longest stretch of our trip. It was slightly strange leaving the house at 4:00am yesterday- dark, deserted and shut-up. Our plan is not to be back until July although there will be people coming and going and looking after the place fairly frequently.

We (Rob, Jo & James) will have a couple of days here in Tenerife before heading across to Gran Canaria where David and Ben will be joining us on Sunday. The ARC people have started sending our emails every evening telling us of all the events we're missing out on by no being in Las Palmas already - which mostly seems to be drinks parties. Apparently, "almost everybody" had arrived by yesterday. We'll just be fashionably late.

Our routine has started already - James is currently leading the "Bums and Tums" session at the end of the pontoon for everybody who is keen (which is Jo). They're doing deep squats at the moment, facing out to sea - which means they can't see the quizzical looks from people walking along the pontoon. 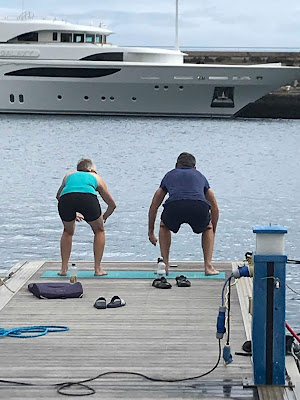