One kind sponsor has promised so-much per pound weight lost between Liege-Bastogne-Liege and the end of the Tour de Force.  But I think neither he nor I intended it to go to such extremes..

I was in Alderney harbour at the weekend, on our boat, having sailed over there for the weekend.  Just prior to going ashore, I checked the mooring and saw it had jumped out of the roller and was chaffing.  I tried to haul it back, but just as I lifted the rope, the boat was lifted by a wave bringing the rope hard down on the steel  edge of the anchor roller.  Unfortunately, my left middle finger was caught under the rope and the last inch or so was avulsed (look it up!).

A trip to Alderney hospital confirmed it had taken 1/2 the last finger bone, and needed to be tidied up properly to heal.  We searched the front of the boat, but the tip was probably in the sea.  A few alternatives were suggested, but in the end it was better to sail back overnight (Nelson style) and then get it dealt with in the UK.  It's now been cleaned, 'debrided' and dressed, and the healing process can begin.

This is the finger now now.  I have picture of the finger just after the accident, but it's really too gruesome to post here.  Let me know if you really want to see... 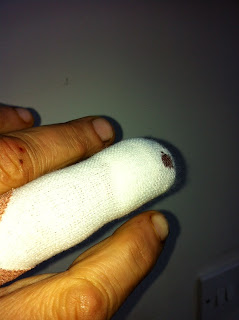